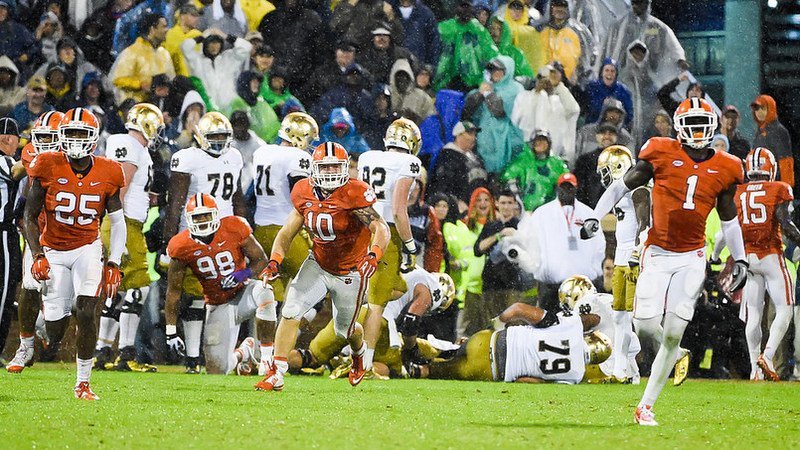 The last time Clemson played Notre Dame, it was in the middle of a historic rain, Dabo Swinney coined an all-time phrase and Notre Dame head coach Brian Kelly became an internet meme.

Can the sequel be even better?

The Tigers and Irish squared off in 2015 as the remnants of Hurricane Joaquin battered the area with torrential rains. Clemson jumped out to a 21-3 lead and held on for a 24-22 victory. After his team staved off a Notre Dame comeback, Swinney created a mantra that has been used as a rallying cry for the Clemson faithful.

Bring Your Own Guts, or BYOG.

After Notre Dame trimmed the lead to -24-22, the Irish went for the tying two-point conversion with seven seconds to play. Out of the shotgun, Notre Dame quarterback DeShone Kizer ran a sweep right. Clemson stuffed the play, sealing the victory.

As Swinney was mobbed by fans in the aftermath, his on-field interview became legendary.

"It ain't always perfect. But what I told them tonight was, listen, we give you scholarships. We give you, ah, you know, stipends, and meals, and a place to live,” Swinney said. “We give you nice uniforms. I can't give you guts. And I can't give you heart. And tonight, hey, it was B.Y.O.G. Bring your own guts. And they brought some guts and some heart and they never quit 'til the last play."

Kelly became an internet sensation before the start of the game when he led the Irish onto the field. As Kelly cleared the visitor’s tunnel and saw the lights and the crowd, his eyes widened with wonder, a moment that will also be forever remembered.

“I think what I took away from it is just a great collegiate environment. I had never been to Clemson,” Kelly said Sunday. “We've been to so many different venues, but to never be on their campus and to just see the tailgating and the pregame and the team run out, I mean, there's a lot of traditions at Notre Dame, but I had never seen the traditions at Clemson. And it was just such a collegiate atmosphere. And it was loud, and it was one of the louder environments that we had played in. And to watch those kids battle, it was -- you know, it was one of those games you remember because it was college football at its best. And they battled through all the elements as well.”

Swinney said one or two plays were the difference in 2015, and he expects that to be the same in late December in the Cotton Bowl.

“For me, it was an unbelievable game. I'll never forget that game. Just like I said earlier, just a minute ago, it was just a few plays,” Swinney said. “I mean, two, three plays that, you know, that went our way. But it was an amazing game. Both teams truly left it all on the field. We played in a hurricane, literally a hurricane. It was just horrible conditions to try to -- but we both tried to do what we had to do to win the game, and it just came down to a couple of plays.

“They were an amazing opponent. And I think, you know, both teams walked away from the game with great respect for each other. And we were very fortunate to win the game. But it was definitely one of those moments that I think everybody -- you know, one of those things that makes college football so great is people watching that game, because you just saw two teams that wouldn't quit all the way down the stretch.”

Kelly expects the game to be similar. Just drier.

“And, again, it will be similar, right? It will come down to a couple of plays,” Kelly said. “And, in every great college game, somebody has got to make a play, and Clemson made a couple more plays in that game. But great collegiate environment.”