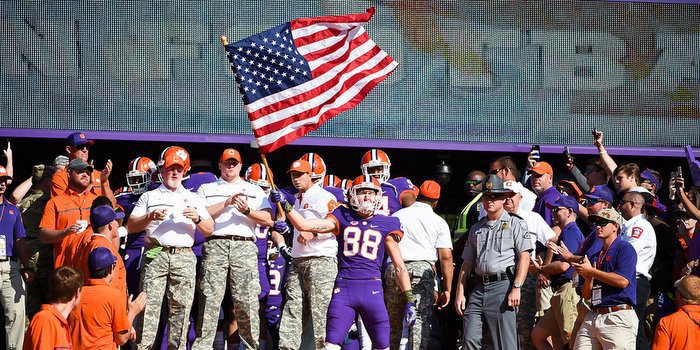 Checking out a quiet Death Valley

CLEMSON – Mondays during football season are always a busy day, but this last Monday was one that made me realize how thankful I am for the life I have, but also for the university I get to cover in my “work.”

I usually get to the WestZone around 9:30 a.m., set up a laptop and stake out a spot for interviews on the fourth floor. We spend most of the next four hours or so cycling through players and coaches and interviews and hoping someone takes pity on us and brings us a bite of food if there happens to be a long delay between interviews.

Once the interviews are over, I head home to make sense of everything we’ve heard and transcribe a few hours of audio for stories later in the week. And yes, sometimes it’s easy to forget that about thirty feet from my spot are floor-to-ceiling windows that provide a gorgeous view of Death Valley. It’s easy to get caught up in the work and forget what a gorgeous spot we have to work a few times a year.

This past Monday was different.

Nikki’s mom and dad decided to take a little getaway/vacation to New York, and Nikki and I kept her three-year-old nephew, Owen. Owen made it out to practice the previous Wednesday, where he got to see his two favorite players – Wayne Train and Ray Ray The Cloud (his words) – and had Swinney blow a whistle at him.

Heady times for a kid. 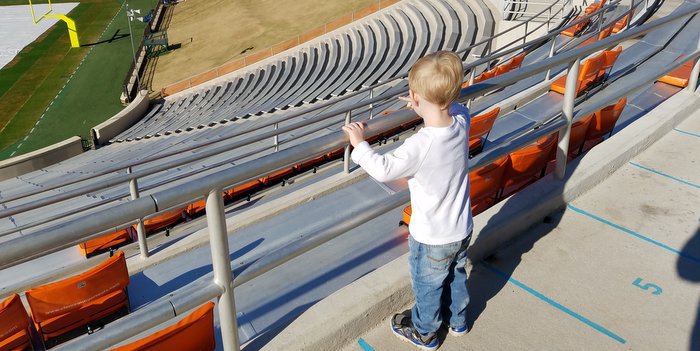 Checking out a quiet Death Valley "

When babysitting plans for Owen fell through Monday, Nikki went into work late with the hope that I pick up Owen and head back home with him while she tried to get her work finished. I buckled Owen in his car seat, and he smiled the kind of smile only a toddler who wants something can smile, and asked, “Can we go see the stadium Uncle Trouble?”

Yes, I am Uncle Trouble to Owen. A year ago this past Thanksgiving I snuck out of a beach house at Edisto and left Owen on the porch, and he shook his finger at me and told me I was in trouble. I’ve been Uncle Trouble ever since.

I drove down through Core Campus – wondering if I should take a detour and get Cane’s – and when Owen saw the stadium I heard a yelp of delight from the back seat. I stopped and parked across the street from Howard’s Rock, unbuckled his car seat and took him across the road to look through the gate at the stadium.

He took it all in, then asked if we would go inside. Of course, we can. We walked up the hill and through an open gate – Owen chattering and asking questions every step – and walked out onto the ramp in the handicap section with Death Valley spread out below us. On a perfectly crisp fall day, we had Death Valley to ourselves.

He turned around with the brightest of smiles and said something I’ll never forget. “Uncle Trouble, look at it. Isn’t it bootiful? “

It’s beautiful indeed, and for seven Saturdays every year we gather inside that stadium and call it home, fans and players and parents and media alike, and we know that when we walk through the gates, we are going to be entertained for the next three-and-a-half hours.

That thrill is why I do the work I do, and sometimes it’s wonderful and refreshing to see things through the eyes of a child. I walked around the field before the Louisville game earlier this season, passing two colleagues, and we each smiled the kind of knowing smile that says, yeah, this is pretty cool, and I can’t believe I get paid to do this. When Clemson played at Florida St. earlier this season, I stood with former linebacker Tony Steward and watched the bands duel in the stands and realized again how much I love this game called college football.

Owen and I left the stadium and walked across the street to the Scroll of Honor. To me, that’s sacred ground. To a toddler, it’s just another pretty spot with grass and trees and a loud squirrel that chattered at us. He’s too young to understand what that place represents, but I showed him the names of our fallen and told him that they were the names of heroes. 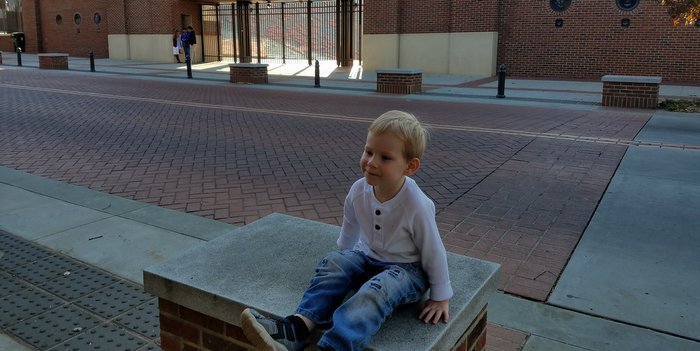 “Superheroes?” he asked. I nodded yes, and told him that each, and every one of them are superheroes, and once again I felt thankful and blessed to work around a university that recognizes its military history and the true heroes – not just the ones on the gridiron – but the true heroes that have given the kind of sacrifice that allows us to all celebrate Thanksgiving and cheer on our favorite teams on Saturday.

We kicked through the leaves, we smiled at the pretty girls, we played in the grass and generally took every chance offered to act like kids and enjoy our own slice of heaven. Owen took every chance to sit down on benches and in every spot that he could find to sit, and he would look across the street at the stadium and remind of how “bootiful” it all was.

As I buckled him back into his car seat, he said, “I got to come to Clemson two times! Can we come back tomorrow?”

Sure, come as often as you like, little man. It’s a place unlike any other, and for that I am thankful.

Just don’t ever take it for granted.

Happy Thanksgiving to you and your families from all of us at TigerNet – Crump and BMeist and Nikki and Tony and all the others that help us keep it going – and remember to hug a child today and show them the wonders of the world.