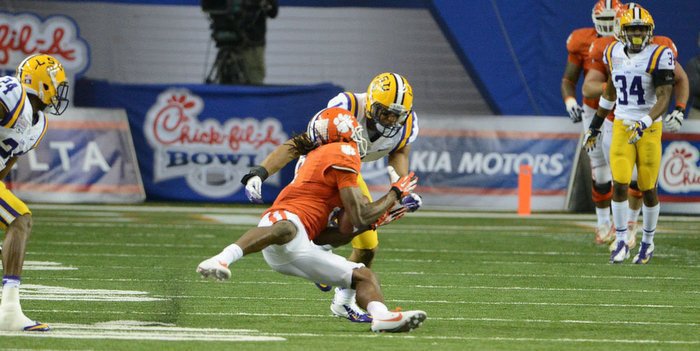 Hopkins makes the grab on 4th-and-16

Fourth-and-16. Just say that to any Clemson fan, and a broad smile will quickly show itself. You don’t have to mention the game or the year or the final score. They know.

So why bring it up now? Nikki and I have spent the last four years living in Powdersville, close enough we can get to campus in 30 or 35 minutes, but also close to Greenville and both of our families. But Nikki works on campus five days a week, helps us here at TigerNet, and I, of course, have to drive to campus several days a week to cover the Tigers. Eventually, the long commutes and having to drive two cars every day wore us down, and we made a move to Pendleton last week.

It was on one of the drives from one location to the other that I began to think about Clemson’s recent run of success, and to pass the time I began to wonder if there was a game, a play, a moment or an event that I could point to as the one that was a defining moment, one that took a good program and put it on the path to greatness.

Some could point to the hire of head coach Dabo Swinney as that moment. Winning the ACC Championship in 2011 is another. Beating Ohio St. in the BCS Orange Bowl. I ran all the great moments through my memory bank, and I kept coming back to 4th-and-16.

Let’s take a quick look back at the play and the game.

Chandler Catanzaro kicked a 37-yard field goal as time expired to give then-No. 14 Clemson a wild 25-24 win over No. 9 Louisiana State in the Chick-fil-A Bowl in the Georgia Dome.

"I knew I had it," said Hopkins. "I knew Tajh was either going to come to me or Brandon Ford. I looked at the film and Adam Humphries was running down the field wide-open so I was like, ‘Dang, he was really coming (my) way from the get-go.' "I knew I had to make a play."

And it didn't go to plan either.

"(LSU safety) Eric Reid was in the middle of the field," Hopkins said, "and it was a crossing route between me and Brandon Ford to kinda isolate the safety and the corner. I was supposed to break-in actually, but Eric Reid played the play great so I kinda made an adjustment to go around, and Tajh threw it off his back foot."

But first, Boyd had to have time. Bayou Bengals linebacker Lamin Barrow blew past Tigers right guard Tyler Shatley on a blitz, but Rod McDowell, who lined-up behind Boyd in the Pistol, chipped Barrow to give his QB just enough time to throw.

"I was hoping he didn't throw it flat," Hopkins continued, "because I adjusted my route to go upfield and he put the ball in the air, and I saw a glimpse of it. I didn't the see the ball all the way through because Eric was on top of me.

"I was just kinda hoping and timed my slide, and it fell right in there. Couldn't ask for a more perfect ball."

The rest is history, as he went on to catch two more passes for 20 yards and draw a crucial pass interference call, before a Humphries' reception set the Tigers up inside the red zone for Catanzaro's 37-yard game-winner.

Clemson reached 11 wins for only the fourth time in school history and the first time since the 12-0 1981 team. While doing the research for this story, I stumbled back across a quote from Swinney that I found telling. Or foretelling if you will.

The weeks leading up to the game were filled with questions about how the Tigers – long considered a finesse team – would match up with an athletic and physical LSU team. The narrative was that LSU’s physical, ball control and I-formation style of play would wear Clemson into submission. 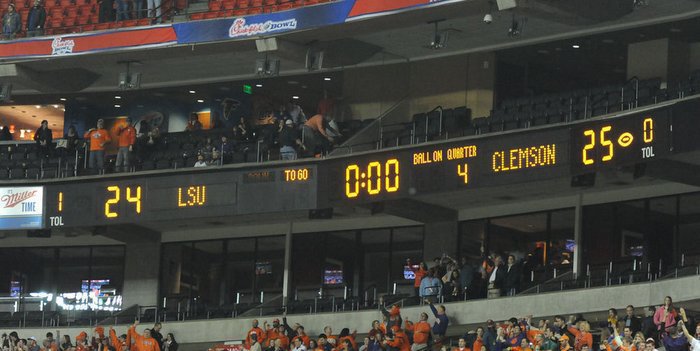 Clemson moved into the new indoor practice facility as the team began to prepare for the bowl game, and the questions surrounding Clemson’s manhood didn’t sit well with the coaches or players. Swinney instituted tackling at practice instead of the traditional “thud, ” and the players held the PAW drill. It worked, and it was LSU’s players that littered the field as the game wore on.

The game was one – as Swinney said – one that Clemson needed to win. The program needed a program-defining victory to show it belonged with the big boys. If 4th-and-16 had fallen incomplete, Clemson would have been just another finesse team that couldn’t stand up to the bad boys of the SEC.

But to get that elusive national title, the Tigers had to learn how to win a big game, and they did it against LSU. Catanzaro kicked the game-winner, but 4th-and-16 was the wind behind the kick.