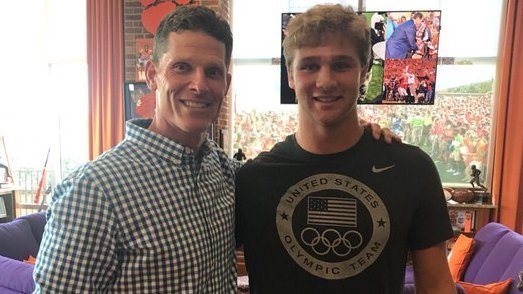 Drama at Ohio State, an August offer, and a September visit led Kane Patterson to Clemson.

The 4-star Nashville (TN) C.P.A. linebacker is no stranger to Clemson, but it took a series of twists and turns for him to finally realize his dream of wearing the iconic Tiger Paw.

Patterson committed to Clemson Tuesday afternoon becoming the Tigers’ 24th commit and the fifth linebacker pledge for the 2019 recruiting cycle – a class that could have as many as 30 players sign.

"When I said my sophomore year that Clemson was my 1st choice, I had no idea the journey I was going to take to get there," Patterson posted on Twitter Tuesday. "Thank you to so many people who made this possible. Incredible what all God put in place to put me at Clemson. His timing is perfect. With that being said, I'm blessed to announce that I'm committing to Clemson University."

After visiting for Saturday’s home opener against Furman, Patterson said in a Tuesday evening interview that he finally found home.

“I really just couldn’t be any happier,” Patterson said. “I just knew that throughout this whole process that was just home for me. I’m just so happy to be there.” The facilities, of course, were as good as they get. The game day experience, there’s really nothing like it, just watching them run down The Hill and touch The Rock, there’s nothing like it. Gives you goose bumps every time.”

It was the effort of Clemson defensive coordinator Brent Venables that got the ball rolling last month.

“Me and Coach Venables have been talking and he was just saying how seven are going to be gone in like the next two years, so they are trying to load up on a new group of linebackers,” he said. “I thought that was pretty big for me.”

Playing in a Venables coached defense is something that most linebackers can only dream about.

“Coach Venables has told me they are super aggressive and they blitz a lot,” Patterson said. “That’s kind of part of my playing style that I love, just to blitz. They just attack and there is no easing up. Like he said, every game the goal is just a shutout. I just think that’s who I want to play under. I just love that about him.”

During his junior season, Patterson totaled 64 tackles, 10.5 for loss, with a pair of sacks and an interception. As a running back, he topped 1,000 rushing yards with 23 touchdowns.