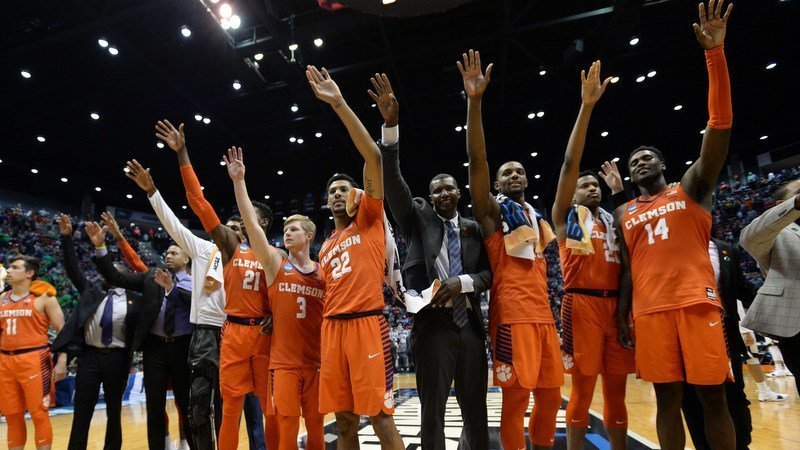 Clemson defeated Auburn 84-53 Sunday afternoon in the second round of the NCAA Tournament and advances to the Sweet 16, where they will take on college basketball superpower Kansas. Fifth-seeded Clemson will face No. 1 Seed Kansas on Friday at 7:07 PM EST in the Regional Semifinals in Omaha, NE. The game will be televised on CBS with the Duke vs Syracuse game to follow at the conclusion.

The announcers for the Clemson-Kansas game will be Jim Nantz, Grant Hill, Bill Raftery and Tracy Wolfson.

Kansas earned an 83-79 victory Saturday night at Intrust Bank Arena in Wichita. The 83-79 victory over a veteran Seton Hall team sends the Jayhawks to the Sweet 16 of the NCAA Tournament. Last week’s Big 12 Tournament Most Outstanding Player Malik Newman came up big again for Hall of Fame coach Bill Self.

The red-shirt sophomore scored 28 points, playing the full 40 minutes and hitting 8 of 14 shots including 4 of 8 from beyond the arc. Newman has scored 38 points and 9 rebounds in his first two NCAA tournament games.

Clemson, advancing to just the fourth Sweet 16 in school history, was impressive in the win over Auburn according to Kansas head coach Bill Self.

“That was probably as impressive of a performance as anyone has had in the tournament so far, and there have been some great performances,” Self said after a game in which Clemson led 43-19 at halftime. “They dominated Auburn in every area — perimeter play, speed, rebounding and in the paint. Watching them today (on TV) was like watching a clinic. We’ll have a good book on them in the next 24 hours or so.”

“They are so well-coached and sound,” Self said of Clemson. “Playing in the ACC they’ve played against some unbelievable teams all year long. This will be a difficult game, a game that will require us to play a lot better than we did this past weekend.”

The winner of the Clemson-KU game will meet either No. 2 seed Duke or No. 11 seed Syracuse on Sunday for a spot in the Final Four.

“Bill Self is one of the best in the business,” Clemson head coach Brad Brownell said. “They have a tremendous team again, won the Big 12, are playing great. Having confidence from playing well these two days out here. We've competed in an incredible league. All season long it hardens you. You see all kinds of coaching styles, different styles of play. So to come through that and to make an NCAA Tournament you feel prepared.

“But then the last thing is really your guys gaining the confidence from playing out on the floor in one of these environments, the big stage, if you will, and playing well. Giving them confidence and this kind of environment that they can make big plays, make shots, defend at a high level and if you stick to that your plan then you can be successful.”