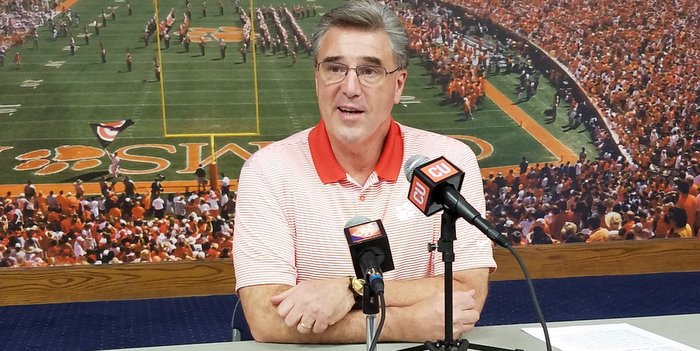 CLEMSON – Athletic Director Dan Radakovich met with the media Tuesday afternoon in the McFadden center, and the main topic of conversation was his decision to retain men’s basketball coach Brad Brownell.

Radakovich covered a variety of topics – including debt and the addition of softball – but basketball dominated the majority of the conversation.

Radakovich said he met with Brownell and Deputy Director of Athletics Graham Neff 10 days ago, and he said Brownell came to the meeting with two typewritten pages of how he wants to improve the program.

“Anytime you have a season where you didn't do some of the things you thought you'd do as a program, you wait until the end of the season to see how everything unfolds and you sit down and have a conversation with the coach,” Radakovich said. “That's what Brad and myself and Graham Neff - our sports supervisor for men's basketball did the previous Saturday. We had a really good conversation - two-and-a-half hours.”

Radakovich was pressed on whether making the NCAA Tournament should be a standard at Clemson, and he said it's more of a goal.

“We deconstructed all of the different pieces of the program. While we didn't go to the NCAA Tournament - a goal each year - there are other parts of the program that have done some good things,” he said. “We are graduating our players. Brad is a good representative of Clemson in the community. We have great community service work by our student-athletes. They're good citizens, which is really important in today's collegiate environment. We weren't that far off. You guys know all of the statistics as it relates to the number of close games where we weren't successful.”

He then said he never wavered from his decision to keep Brownell, while reiterating that he never made contact with former VCU coach Will Wade.

“We wanted to sit down and talk through what can we do to make this better. To Brad's credit, he was incredibly prepared, very frank, very open,” Radakovich said. “We talked about a lot of pieces. It was a conversation and not one side dominating the two and a half hours. Coming out of there, I know that Brad wants to be here. I know that Brad wants this to work. We took a huge step forward last year when we renovated the coliseum. That was a big missing piece that might not have been here in previous years. Now, we've got to continue doing some things that will allow us to attain the success that we all want and desire here. That's what I got out of the meeting. That's why after we were through, the decision was made to keep Brad and to work with him over the coming weeks to make sure we're doing the things we need to do and he's doing the things he needs to do within the program to bring us the success we want.”

Radakovich intimated that he thinks there will be changes on the basketball staff at some point in the next few weeks, but said he didn’t force those changes.

“At the end of the day, it comes down to how the structure inside the program is working. There's not one ounce of me that doesn't think that Brad's a really good leader of the program,” Radakovich said. “Are there things that you need to look at and that only he can look at? I don't hire and fire people on other folks' staff, that's why you hire a head coach. He's got to be able to take a critical look at his own organization - are there gaps that we need to be able to help fill within the basketball organization? That's a continuing conversation, mostly with Graham on a day-to-day basis to make sure we get those things fixed.

"I'm pretty sure it won't stay the same. There could be a combination of additions and subtractions and things of that nature," Radakovoch said. "Some of our coaches, they're sought by other folks. We need to be able to retain some of our coaches. It's the evaluation that he's done. We're coming up on a week where every basketball coach is going to descend on Phoenix, Arizona. I think normally, any changes happen within a very short period after that time."

Brownell wasn’t offered an extension, and Radakovich said that there will be conversations about removing the part of his buyout that requires mitigation. The school would reduce the buyout in exchange for removing the mitigation, which requires a coach to find another job (the school then owes the coach the difference between the buyout and what he is paid at the other job).

“When Brad signed his contract in 2014, one of things that was in the contracts of that era were buyouts associated with mitigation. Our contract with Brad was 3.5 million dollars on a buyout, but it was mitigated,” Radakovich said. “That meant that if Brad went and got another job then we wouldn't be paying that much money. We would deduct or mitigate that against that 3.5 million dollar total over the three years. Those are really dicey parts of contracts. I can go back to the extension with Coach Swinney, we got it done and then it took another six or eight weeks to get the mitigation language right.

“We had Brad's contract done and then it took another four or five weeks to get the mitigation language done because there's a lot of effort on our part and a lot of effort on the coach's part to continue to seek employment. One of things that we're looking at right now is to look to move away from that type of clause in the contract to create a number that is unmitigated, so if there's a separation somewhere down the road we know exactly what we owe that individual. Just based on value, it would be less than what the mitigated number would be. That's where we are right now - talking through some of those things with Brad and his representative.”

He then drove home the point that retaining Brownell had nothing to do with money.

"None of this had to do with dollars," Radakovich said. "Thankfully because of our ticket situation, our ACC situation, our new sponsorship, our IPTAY donations, our capital gifts, we're in a really good financial position right now. We are very close - not dollar for dollar - to the same amount of reserves within IPTAY and the athletic department as the day I walked in, but we've also just done 140 million dollars of capital improvements along the way. That dollar stuff wasn't part of this evaluation of this discussion that had. The 3.5 million dollars was never going to be 3.5 million dollars because it was mitigated. Somewhere during that period of time, Brad - who is a very good coach would get another job and we would never pay that amount of money to him. That's something that wasn't quite understood by the masses, but it was an important part of what we knew and understand."

He said that he didn't put "tourney or bust" or wins and losses expectations on the program, or give Brownell an ultimatum.

"I think you always need to leave stuff like that open-ended because there are things that happen during the year that are totally outside of the control," he said. "If you say you have to win x games, you run into a year like we had where you lose three games by three points in a really good league. You can't do that (put goals) because I think that puts undue pressure on the administration and the coach, but more so it puts ridiculous pressure on student athletes and that's not what we're about. We want our student-athletes to have a good and positive experience."

Radkovich continued by saying the NCAA Tournament isn't the only measurement for a coach, and that he has core values he wants his coach to achieve.

"Those standards probably circle more around core values - graduate players, don't cheat, be good community members, be good university partners," Radakovich said. "Those are standards that you have with the program. At any given year, you look and say do we have enough talent in our pool right given the people we're playing to really compete at a high level, so those goals may fluctuate during the course of time.

"It would be a goal each and every year. Standards are things that you do each and every day that might not have an outcome that is calculable. Making the NCAA Tournament is certainly something that we desire to do. It's a goal here at Clemson each and every year. There are other goals that we may put out there that he and I might sit and talk about that we want the program to attain during the course of the year. He may meet some of those. He may not. The standards are almost unequivocal. You have to do those.

"We have to look at what have we done as administration to allow our basketball program to be successful. We've made the investment and they moved in in September to that investment. I think it's important to give an opportunity for the coaches we have right now, who I believe in the ability to make the NCAA Tournament, to do that with the right number of good quality resources."

We will have more on our conversation with Radakovich in the coming days, including his explanation on adding softball, discussions on women’s basketball coach Audra Smith, debt within the department and future plans for facilities.