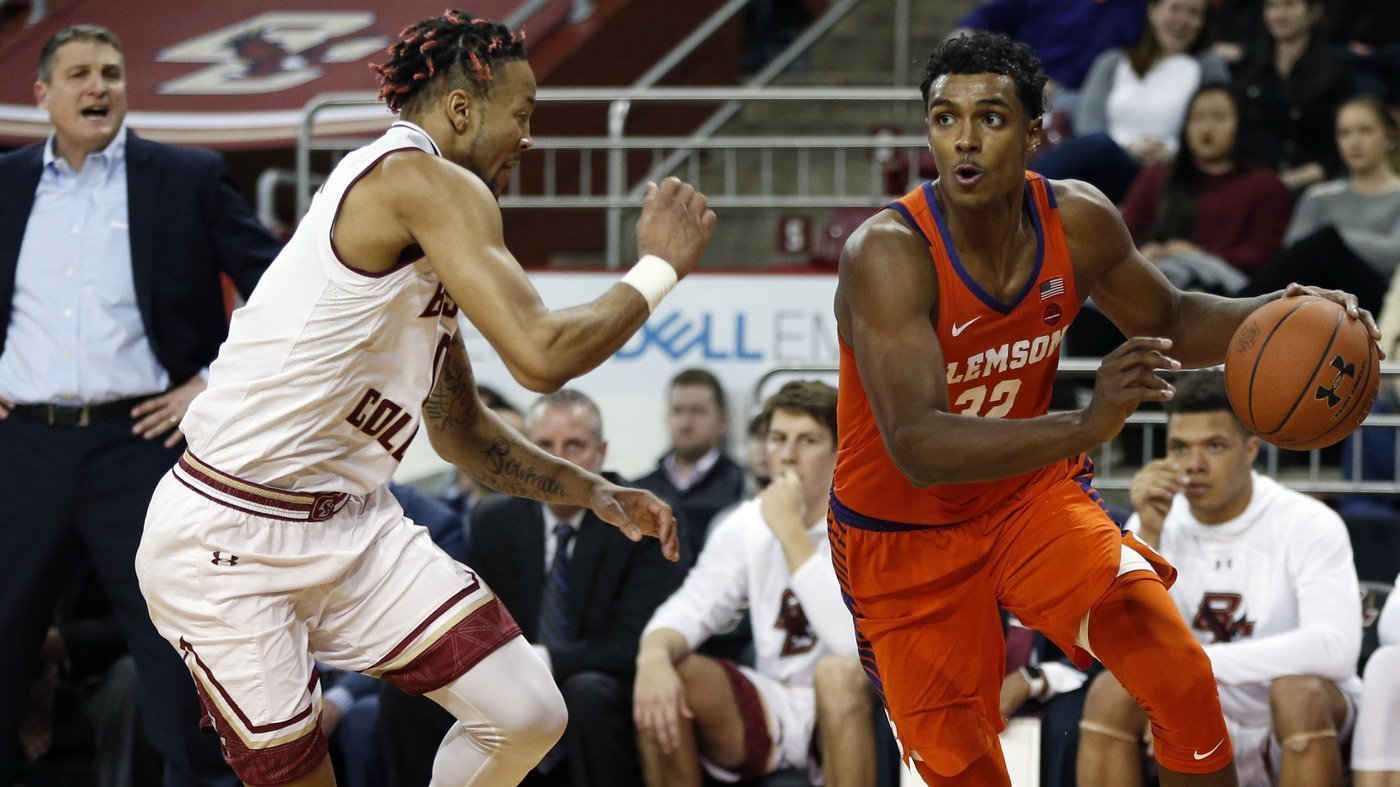 Grantham notched a career milestone and totaled a team-high in points and rebounds in the win over BC. (USA TODAY Sports photo-Greg M. Cooper)

After Clemson held as large as a 19-point lead, a rare miss from beyond the arc from BC guard Jerome Robinson, plus some clutch free throws sealed a ninth-straight win for the Tigers (13-1, 2-0 ACC).

Senior forward Donte Grantham contributed early and often. He notched double-figures in the first 12 minutes as well as five rebounds, two assists and two steals in building the lead to 26-14.

He had a double-double just past the midway point and finished with a team-high 23 points and 14 rebounds, dishing five assists with three steals.

“That’s what he does, a little bit of everything,” Clemson coach Brad Brownell told ACC regional TV. “If we need him to rebound, he can rebound. He can handle the ball against pressure and pass. Had a huge three in the corner in the second half."

The Tigers went on an 18-2 run in the first half and hit all eight free throws attempted, while the Eagles didn’t get to the line to lead 38-23 at the half.

Some hot shooting from BC’s Robinson quickly cut into that comfortable margin.

Grantham notched a career milestone and totaled a team-high in points and rebounds in the win over BC. (USA TODAY Sports photo-Greg M. Cooper)"

Grantham came up big again with a pair of threes to stem the tide, including one where he was fouled, but Robinson kept the pressure on, slicing the lead to two points with just over three minutes left.

After some back-and-forth action, BC’s Ky Bowman tied the game at the free throw line up, 68-all, with a minute left and Robinson had an open look for three points to take the lead that went in and out of the cylinder.

From there, Clemson sealed the game by knocking down all six free throw attempts, finishing 18-of-20 on the night.

“When knew we needed to be aggressive defensively on Jerome and Bowman,” Brownell said. “Those guys are great offensive players. In the second half, we couldn’t stop Jerome. He was just unbelievable. Just thankful we were able to build up the lead and hang on with some big free throws.”

“This was a hard-fought game. They had tremendous momentum there at the end of the game. I was pleased with our guys’ late-game execution. Finally got them to miss one or two shots, handled the ball against the press and it was big that guys made free throws down the stretch.”

Robinson scored 25 of his game-high 28 points in the second half, hitting six 3-pointers. Bowman finished with 19 points.

Going into the week, Clemson entered the top-25 for the first time since the 2009-10 season.

The Tigers head back home next for a noon tip-off Saturday versus Louisville on ACC Network.