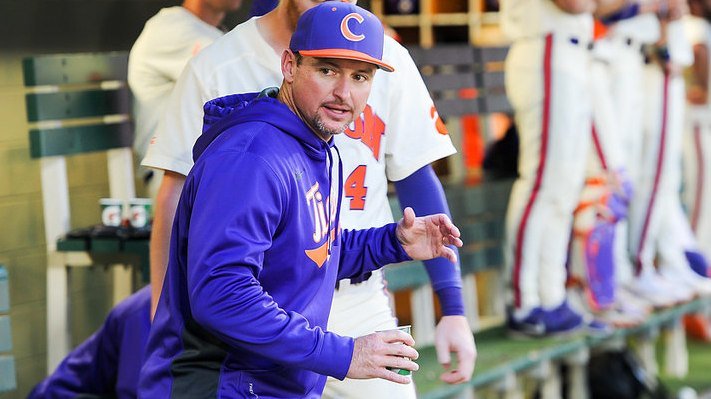 Lee and the Tigers moved indoors for Tuesday's practice

CLEMSON – It’s not uncommon to see afternoon thunderstorms pop up in South Carolina this time of year, but weeks of rain and the remnants of Alberto have the entire Upstate battling rising flood waters, downed trees, and downed power lines.

The weather pattern is also disrupting Clemson’s practice schedule for this weekend’s NCAA Regional – the baseball team is hitting only in the indoor batting cages and is using the indoor football practice facility for infield practice.

The coaches arrived early at the indoor facility, marked a corner of the end zone as home plate and used tape measures to mark out an infield. The coaches ran the infield through practice before bringing in a machine for bunting practice.

It’s not ideal but Lee is thankful to have a place to practice.

“We'd love to be able to go outside and practice on our home field, but the weather is just not cooperating with us right now. Again, you can't control the weather,” Lee said Tuesday. “There's no need to worry about it. We were able to get a great practice in today. We spent some time in the cages, got a lot of really good swings and a lot of quality work in the cages. Then, we came in and did plenty of fundamental work here in the indoor facility. We're lucky that we have an indoor facility that we can come into in inclement weather and get a good workout in. Overall, we got a great practice in today. We'd love to be on the field, but it is what it is and we just move forward.”

Lee said he has to clear it with the football staff before the baseball team takes the field.

“We have a way of doing that. The football staff is great to work with,” he said. “As long as it's available, they always let us come over here and get a workout in, so we always appreciate it. You're playing on the turf, so there are no bad hops on the turf. It's pretty easy to catch a ground ball on the turf.”

Clemson opens the double-elimination regional against Morehead State on Friday at 6 p.m. Vanderbilt plays St. John's on Friday at noon.

The coaches are still unsure if outfielder Kier Meredith will be able to play.

“Our big goal right now is just to get Kier to the point to where we can make a decision on whether he's going to be available or not,” Lee said. “This was the second day in a row that he hit off the tee. We're hoping to be able to have him hit off of an arm - like batting practice or front toss - more of a moving ball. It's a little more exertion on his part to hit BP, so we have to see how he feels there first before we move into trying to make a decision as to whether he will be available for the weekend or not.”

Lee also said the coaches haven’t made a decision on the pitching rotation for the weekend and will rely on matchups.

“We're going to meet this afternoon. Since the field was announced, we tried to get stats and try to figure what we feel like from a matchup standpoint would be best for us,” he said. “We're going to meet here and start discussing who we want to match up with Morehead St. and how does that affect the rest of the weekend.”