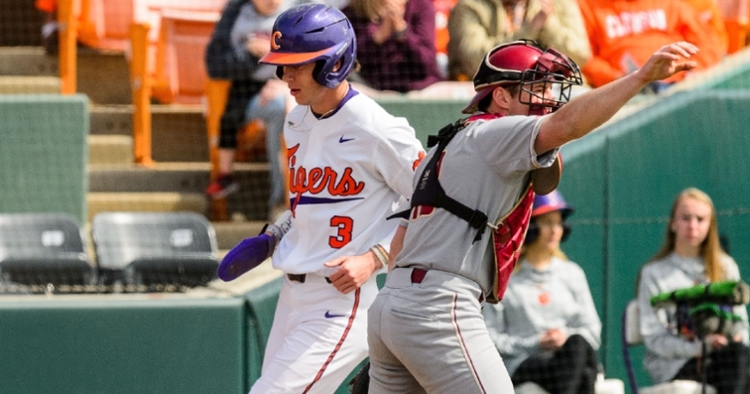 CLEMSON – Clemson’s bats are starting to come to life.

Clemson came back from a 6-3 deficit and scored the winning run on a slide by Sam Hall in the bottom of the ninth in defeating Boston College 7-6 at Doug Kingsmore Stadium on the sun-splashed Sunday afternoon. Clemson swept the opening ACC series of the season and improves to 12-3 overall and 3-0 in the ACC while Boston College falls to 5-9 overall and 0-3 in the league.

Davis Sharpe walked on four pitches to lead off the bottom of the ninth. Pinch-runner Sam Hall stole second – he was called safe after a review – and moved to third on Chad Fairey’s sacrifice bunt. The Eagles brought the infield in and James Parker hit a slow roller to short on the first pitch. Hall was off at the crack of the bat and beat the throw to plate for the 7-6 win.

The Tigers got a run in the bottom of the first. Dylan Brewer doubled to lead off the game and came around to score on Bryar Hawkins’s single to right-center for a quick 1-0 lead.

The Eagles answered with two runs in the top of the second on a homer and two doubles, but Clemson scored two runs of its own. Adam Hackenberg was hit by a pitch and Bo Majkowski walked. Elijah Henderson smacked a two-run double down the third-base line and Clemson led 3-2.

The Eagles chased Clemson starter Spencer Strider in the third with two singles and two walks and took a 4-3 lead, and then scored two more in the top of the fifth for a 6-3 lead.

The Tigers loaded the bases with no out in the bottom of the frame, and James Parker rolled into a double play that scored the run to make it 6-4. Davis Sharpe doubled to lead off the seventh, and Parker doubled down the third-base line and Sharpe was thrown out at the plate. Parker advanced to third on a wild pitch and came around to score on Hackenberg’s single to right to make it 6-5.

Brewer walked and Henderson singled to open the eighth, and Kier Meredith reached on a fielder’s choice to put runners at the corners with one out. Hawkins flew out to left and Brewer scored to tie the score at 6-6, but Meredith was thrown out trying to steal second to end the inning.

Clemson’s relievers were excellent. Geoffrey Gilbert pitched three scoreless innings to hold BC at bay, and Carson Spiers pitched the last 1 2/3 innings in picking up the win.

The Tigers host a pair of midweek games this week. Presbyterian comes calling at 6 pm Tuesday and Winthrop travel to TigerTown for a 6 pm start on Wednesday. Clemson returns to ACC action next weekend, traveling to Wake Forest for a three-game set.

Clemson vs. BC game three box
Get your Trevor Lawrence and Travis Etienne Jaguars gear right here!
Comment on this story