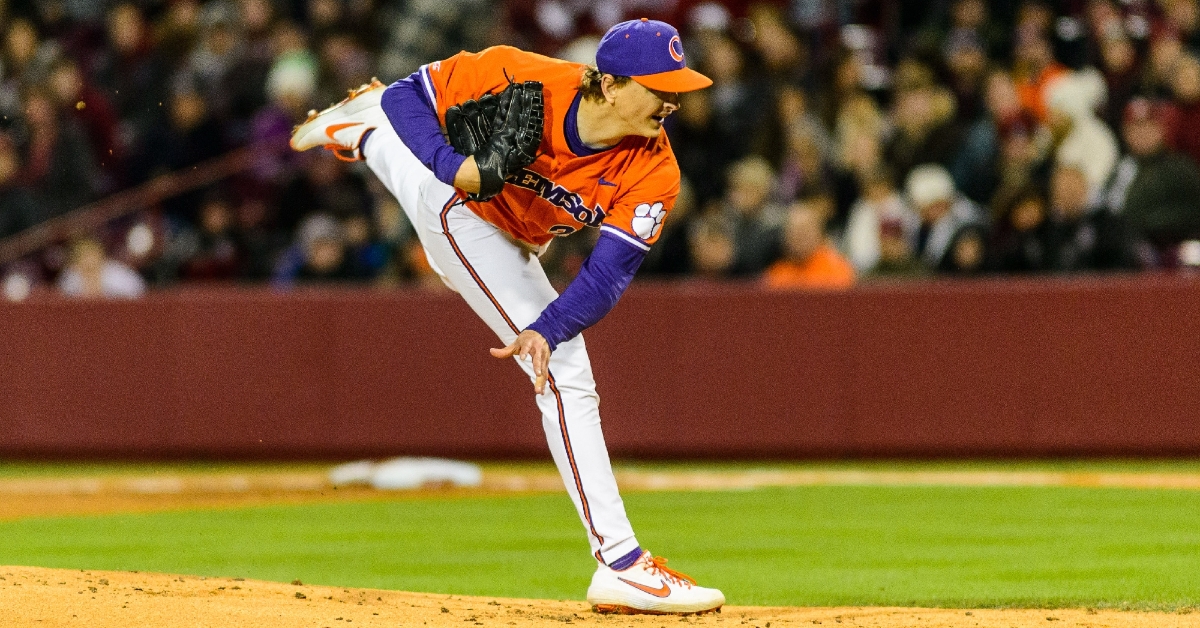 Sam Weatherly has 33 strikeouts in 17 innings this season.

That’s how Monte Lee describes his Friday starter Sam Weatherly after a second dominant start in a row.

Weatherly didn’t allow a hit over seven innings to open the South Carolina series at Founders Park Friday, where only four Gamecock batters reached base on him in the 7-1 Clemson win (three walks/hit batter).

“I don't think that Sam felt any extra pressure,” Lee said. “Sam, if you watched his demeanor, one of the biggest adjustments that he made from week one to week two -- he was really amped up in week one. And it showed. His emotions -- he tried to use his intensity almost too much. He controlled his intensity last week...And he was even more relaxed tonight. It just says a lot about his mental toughness. That's mental toughness.

“Can you maintain control of your emotions? In an adverse environment like this. He did an outstanding job of that.”

Weatherly has 33 strikeouts in 17 innings pitched this season. He says it’s a pretty simple formula.

“I wanted to throw strikes. I wanted to pound the zone,” Weatherly said. “That's always my goal and something I've been working on throughout the season. I thought their approaches were good and they took good swings. I just happened to be a little bit better tonight.”

“Just trying to get into counts that are favorable for punch-outs. Once I have two strikes, it's mine. That's always my mindset. I want to get to two strikes as quick as possible and when I have you there -- I want to finish ya...Ultimately I'm just trying to throw strikes.”

The winning decision was a second in as many outings against the Gamecocks for Weatherly, a Michigan native who has embraced the rivalry.

“Being an out-of-state kid, people would say that I don't care too much about this,” he said. “But I've been around it for three years now. And I can tell you that it means as much to me as anybody. It's really special to go out there and perform like that and have my defense play the way they did and the way coach (Andrew) See call the game -- it all came together for a special win.”

Now the Tigers have momentum going into game two, which is also in Columbia at Segra Park (3 p.m./ACCNX).

“It's a rivalry. Three-game series. We're pretty much playing another away game (Saturday) here in Columbia,” Weatherly said. “We're going to lock back in. We're going to do what we do and try to do win game two (Saturday).