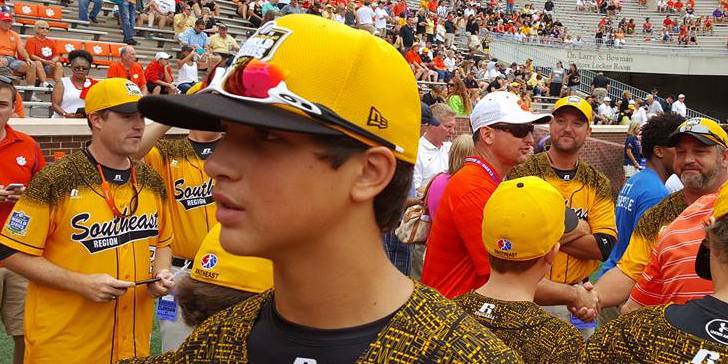 Little League World Series hero Alex Edmondson stood under the goalposts on the WestZone side of Death Valley two years, took in his surroundings and posed for pictures with Clemson baseball coach Monte Lee and his teammates.

Already a Tiger at heart, Edmondson knew then that Clemson was the place he wanted to be, and he gave his verbal to Lee and the coaches Friday night in Clemson. The 2020 two-player spoke with TigerNet on his way home and said he committed during a meeting with Lee and pitching coach Andrew See.

“Actually, I’m on the way back from Clemson right now,” Edmondson said. “I sat down with Coach Lee and Coach See in the office and he (Lee) was talking to me about how he wanted me and I told him, ‘Coach, I want to be a Tiger.’ He asked if I was saying that I wanted to play for him and I said, ‘Yes, sir.’”

The 6-2, 195-pounder said Lee is one of the main reasons he decided to go ahead and commit.

Edmondson was a standout this past weekend at the WWBA 2020 Grads or 15U National Championship at Perfect Game Park at Lake Point in Cartersville, Ga. Edmondson pitched 6.2 innings, giving up one earned run on two hits and two walks, while striking out seven. He finished the tournament with a 1.1 ERA. He also had 20 plate appearance in eight games and finished the tournament with four singles, a triple, a home run, 12 RBI and a stolen base for a .316 batting average and a .929 OPS. His work drew the eye of See.

“I got the offer a few days ago. I was playing in Atlanta and Coach See was down there and he watched me play,” Edmondson said. “He told my coach to have me call Coach Lee and I did and got the offer.

Edmondson said Clemson is the place he wants to call home.

“I grew up in Easley and it’s always sort of been like home to me and I feel like it’s where I’ve always wanted to be,” he said. “I went on a visit and I loved it. I went to other schools and it just seemed like the place for me.”

Edmondson gained national attention during Northwood Little League’s run to the Little World Series in Williamsport, Pennsylvania, two years ago. Edmondson hurled a no-hitter and struck out 15 against Rhode Island. Northwood was eliminated in the second round, but not before Edmondson became a fan favorite.

He says life has changed since that appearance.

“It’s just the attention. All of these people give me attention, and some of it is out of jealousy,” he said. “Some kids my age want to talk crap to me, but the biggest part for me is I can’t let my head get too big. I just have to stay humble.”