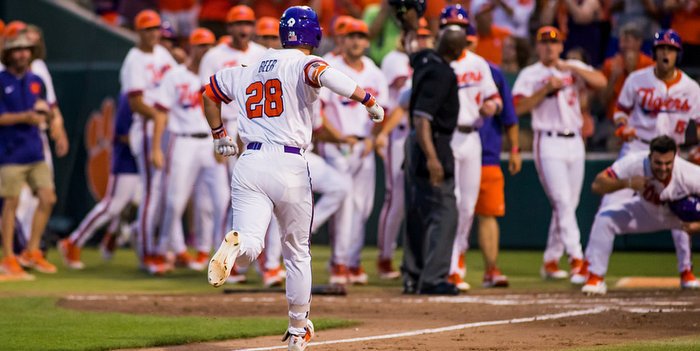 CLEMSON – The ball arced high into the night sky, and fans who had been waiting for something to happen rose to their feet in unison with a throaty roar as the ball cleared the outfield fence. Seth Beer saw the ball float over the wall and was overcome with a wave of emotion.

Clemson trailed Coastal Carolina 8-7 in the bottom of the eighth inning in Tuesday night’s game, and after the Tigers put runners at first and second with one out, Coastal head coach Gary Gilmore opted to walk the hot-hitting Reed Rohlman and pitch to Beer.

From a tactical standpoint, the move made sense – Beer has struggled in those situations recently, and it set up the double play. Beer knew why it happened, but he was still incredulous.

“Honestly, it was the first time it's ever happened to me,” Beer told TigerNet. “And in that situation, I knew what they were trying to do and load the bases to set up the double play. My thought process was to get the tying run to the plate.”

Beer walked to the plate knowing he was struggling, but he took a moment to reflect.

“I've been put in those situations of late and I haven't succeeded. My teammates have had to pick me up in those situations,” he said. “Knowing what failure felt like, I didn't feel any pressure because I have Chase (Pinder) hitting behind me and he's been scorching the ball behind me. I knew if I didn't get the job done, he would have. I think it was a little bit of a deep breath heading into that at-bat, and I said I am going to just do the best that I can. All I can do is see the ball, hit the ball. It was a fastball inside, and that's something I've struggled with.”

On the mound for Coastal was sophomore righty Jason Bilous, who mixes in a high-90’s fastball with a knee-buckling changeup.

“That guy is a really, really good pitcher and he threw me the best pitch I've ever seen in my life the at-bat before,” Beer said. “So I went up there knowing his tendencies and expecting what he was going to throw. And I told myself that if he throws me another fastball after I check-swung on that changeup I thought I had the timing and I could put a good swing on it. Sure enough, threw it in an area where I could get some extension on it.”

Beer, in the midst of a month-long homerless drought, parked the pitch in the seats for a grand slam and an 11-8 lead the Tigers wouldn’t relinquish. As he rounded the bases and reached his teammates at home plate, it was obvious Beer was overcome with emotion.

“In that moment, the first thing that popped into my head was, 'Even if that guy catches it, I've done my job. We are still going to score a run and we are in this ballgame.' When I saw it go over the wall and into the bleachers I just lost it,” Beer said. “Coach Lee told us to play with some emotion today and show some emotion. I lost it. And I said, it's ok to lose it now. I got to my teammates and they were freaking out and this is something I will remember the rest of my life.

“I think it's huge for our team. For us, that is a huge part of leading into this weekend.”

Clemson ends the regular season at NC State, starting Thursday night in Raleigh, and Pinder hopes the big win – and Beer’s big homer – is the impetus for a strong close to the season.

“This is a big one for us. It's big for us because we have our last ACC series this weekend and then the ACC Tournament next week,” Pinder said. “This is a big boost going into the next week and hopefully, it translates.”