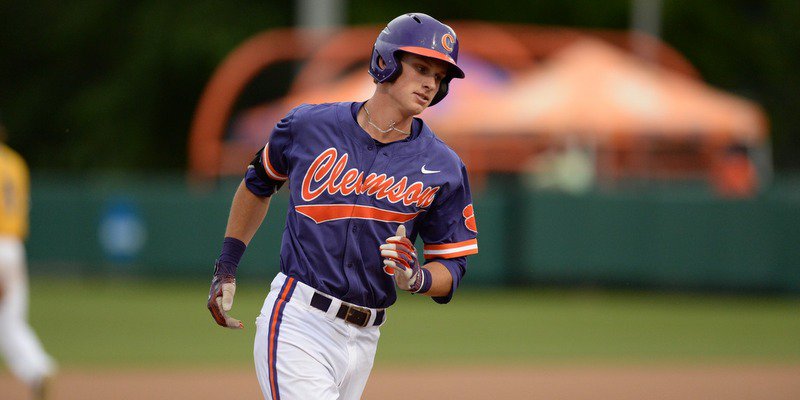 Logan Davidson homered and drove in three runs and Owen Griffith provided the kind of clutch pitching Clemson has been looking for as No. 1 seed Clemson eliminated No. 4 seed UNC Greensboro with a 6-3 victory in the NCAA Clemson Regional at Doug Kingsmore Stadium Sunday evening.

Clemson advances to play Vanderbilt in the nightcap. Sunday’s game started four hours late due to weather in the area, and once it started UNCG had the momentum in taking a 3-0 lead. However, Seth Beer and Davidson homered and Griffith pitched 4 1/3 scoreless innings in picking up the win, his first of the season.

"What a great win. We fell behind early three runs but didn't panic," head coach Monte Lee said. "We kept competing. How about the job of Owen Griffith? Owen Griffin saved us right there. Unbelievable. Brought a man early in the ballgame and he pitched an outstanding ballgame. Throughout zero after zero after zero, even with some adversity there in the eighth inning. And he pitched his way out of it. We swung the bats well. We got really good production from the bottom of the order. You know Wilkie had a great game often simply. Jordan Greene did some things--moved a runner over. Overall, Seth had a great day for us. So we got good production throughout the lineup. We played good defensively, but the story the game really for me was Owen Griffith. He kept our season going."

The Spartans put a three-spot on the board against Krall in the bottom of the third, and it started when Beer dropped an easy fly ball in right. A double, two singles and a hit batter later UNCG held a quick 3-0 lead. 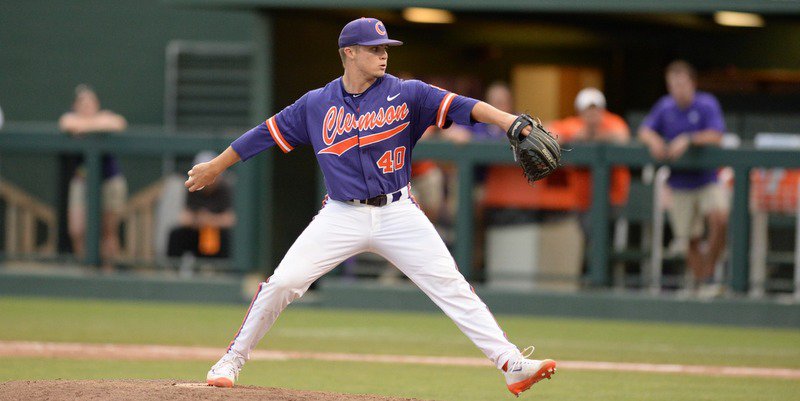 Beer got one of the runs back in the top of the fourth, hitting a laser shot over the wall in right-center for his 16th homer of the season. The Tigers added another baserunner in the inning, but couldn’t convert and trailed 3-1.

The Tigers added another run in the fifth. Kyle Wilkie singled down the left field line, and he advanced to second when Jordan Greene’s bouncer to short was bobbled for an error. Wilkie moved to third on a long fly to center by Logan Davidson and scored on a deep fly to left by Rohlman, making it 3-2 UNCG.

Krall toiled into the fifth and got two quick outs, but a double down the right field line ended his day. He was replaced by Owen Griffith, who got the final out of the inning to keep the score at 3-2. Krall went 4 2/3 innings, giving up five hits, three runs (just one earned) with a walk.

Griffith held the Spartans in check through the sixth, and the Tigers took the lead in the top of the seventh. Wilkie led off the inning with a sharp single to left – his third hit of the day – and moved to second on a wild pitch. Greene slapped a roller to second that moved to Wilkie to third and Davidson made them pay.

Davidson hammered a 1-0 pitch high and deep onto the batting cages in right field, a two-run shot that put the Tigers in front for the first time all day at 4-3. It was Davidson’s 12th homer of the season.

"It's huge for us. I mean we had the infield in with a runner at third base and were just trying to hit the ball through the middle of the field and he runs one out of the yard," Lee said. "So that obviously was a huge bat right there as well. It's pretty cool when you get guys like Wilkie, and Davidson and Owen Griffith-- we got three freshmen right there that are making major contributions to our team tonight to help us when this ballgame."

The Tigers weren’t done. Rohlman singled, Beer walked and Chase Pinder singled to center to load the bases. Andrew Cox struck out on a pitch in the dirt, but the ball eluded the catcher and Rohlman slid in ahead of the tag for a 5-3 lead heading to the stretch.

Clemson added on in the eighth. Grayson Byrd doubled down the line in left to lead off the frame and moved to third on Wilkie’s sacrifice bunt. Jordan Greene walked and stole second to put runners at second and third, and Davidson lofted a high fly to left that scored Byrd for a 6-3 lead.

Griffith said he didn't want to be the reason the Tigers lost.

"I wouldn’t say I was surprised. I feel like I’ve done my job throughout the season, so I was very anxious to get out there and I was ready to get out there. I wasn’t nervous at all. I knew what I had to do and I had one focus and that was to get them out and that’s what I did."

The Tigers will take on Vanderbilt at 9:50 p.m.

Clemson vs. UNCG boxscore
Get the latest Clemson gear right here!
Comment on this story