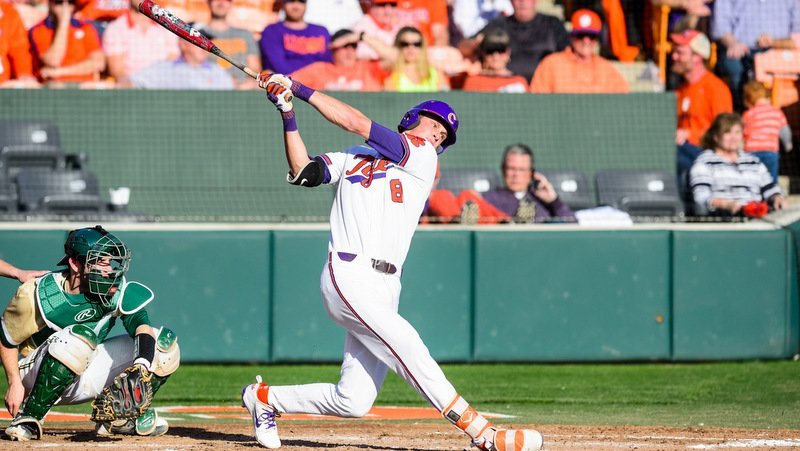 Davidson and the Tigers play at Virginia this weekend

Davidson had a career high of four RBIs and went 2-for-4 against Kennesaw St. Tuesday. Davidson also added his seventh home run of the season to that list, with a 409-foot bomb to left field. In Wednesday’s win over Presbyterian, Davidson scored four runs.

Davidson has been on a hot streak the past couple of weeks, with a home run in the sweep of Wake Forest last week, and solid outings against Georgia, and Miami. Davidson credits this improvement to the simplicity of the game.

“Definitely, it’s been a struggle recently, just getting back to simplifying things. Just keeping it simple. It’s not a tough game if you think about it, just see the ball, hit the ball. That’s kinda what we’ve gotten back to,” Davidson said.

At the start of the season, Davidson was getting on base, but not with hits. Davidson took walks at the beginning but has now found his groove at the plate and more than not gets on base with a hard-hit ball.

“I mean I’m definitely seeing the ball better, like watching it all the way to the bat instead of losing it. And I think that’s key for me recently. Just getting my foot down, and it's working out well for me,” he said.

Starting on April 10, against Georgia, Kier Meredith batted leadoff with Davidson following behind. This drop in the lineup didn’t seem to bother Davidson - instead, he looks forward to it.

“I love it. He gets on base all the time, never hits it in dull places, walks a lot,” Davidson said of Meredith. “So, it’s always nice to have that hole open as a left-handed hitter so it’s nice having him in front of me.”

The Tigers went throw a dry spot for a few games, first losing the series to Miami, then again at Georgia, but got their groove back with a sweep over Wake Forest last weekend.

“That was a huge series for us. They are a great ball club. Especially in a place like that, it’s worth everything. That was a big win for us,” Davidson said.

Head Coach Monte Lee told TigerNet after Tuesday’s win over Kennesaw, that Thursday before heading to Wake Forest, he gathered his team for a team meeting. There, they talked about what needs to change and areas for improvement. It was there that Monte and his team realized just how simple this game could actually be.

One aspect of Davidson’s game that is not so simple is his batting stance. He is known to bat left and right-handed in practice and games, but which one he chooses, depends entirely on the day.

“Funny you ask that it’s kinda day-to-day. It just depends honestly, just wherever I get more at-bats from is probably where I’m most comfortable at,” Davidson said.