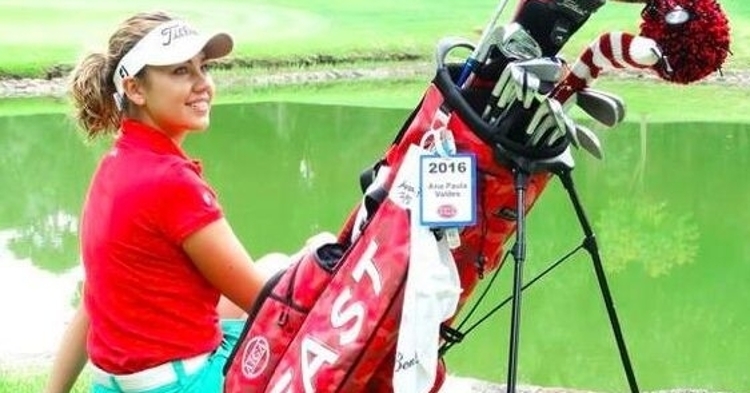 Early evenings on the shore of Loch Lomond lake are usually peaceful and relaxing, but for former Clemson golfer Ana Paula Valdes, one evening recently turned into a matter of life and death.

Valdes is one of the best players in Clemson history. Valdes was a four-year starter who never missed a tournament and played in 40 in a row between 2016-17 and 2019-20. She finished with a 73.75 career stroke average, fifth-best in Clemson history, and third-best among players who played more than one year. Valdes is second in tournaments played in school history with 40 and tied for second in rounds played with 115.

Valdes is also a first-year player on the Women’s All Pro Tour and competing in the NWA Charity Classic in late June in Bella Vista, Arkansas. She had just completed a practice round at the Scotsdale Golf Course. After the round, Valdes and her boyfriend, Alberto Doniga, retired to the home of host family Kathy and Maurice King, who live high above Loch Lomond.

“So, we had a practice round. We played 18 holes, the practice round for the tournament. And on the way back, I mentioned to people how it was a matter of luck that I was there at that exact moment because on the way back, a friend from Mexico asked me for a ride,” Valdes told TigerNet. “So we literally were like, ‘Oh my God, now we have to wait.’ So we sat in the car for 30 minutes waiting for my friend. And then on the way to the housing, she goes, ‘Hey, is it cool if we stop at Walmart to get some groceries?’ And we're like, ‘Yeah, might as well, we're going to buy some food and whatnot.’

“We got food to go, we dropped them off. We're finally getting home, and we are debating that we should eat inside or outside off the porch because it was a pretty good day. So, we decided to eat outside. We sat down. That's literally when it happened, we sat down, we were about to start eating food and stuff like that.”

A golf cart carrying a local woman was careening out of control.

“And all of a sudden, I hear a noise and I told my boyfriend, I was like, ‘Oh my God, it's a tree falling’ because it sounded like wood breaking,” Valdes said. “I turn around and I literally see the cart just losing control going down the hill. I saw it was a lady and that's when I just literally started sprinting that way.”

The cart jumped a railroad tie, became airborne, and then crashed through a wooden fence as it rolled down the embankment towards the lake. Valdes jumped out of her, told the host family to call 911 and she raced the 300 yards to the lake with Doniga not far behind.

“I had to run towards some stairs and then when I got to the stairs, it leads to a rowing dock. And then from the rowing dock, I saw the lady and she was maybe 30, 40 yards from me,” Valdes said. “That's where she ended up in the water. Because the cart itself didn't go in the water, she went through the front and was thrown into the water. After that I literally just jumped into the water and started swimming her way.

“Everything was so fast. And I remember after sprinting away, like I mentioned because I just had a feeling it was going to be pretty bad. So, I got there first. I get to the rowing dock and the first thing I look at is the cart. But I didn't see anyone. I was like, Oh, my Lord, where is the lady? Where's the lady? I looked out and she's passed out in the water and I could only see her bottom sticking out. I thought oh my gosh, she might be gone. But that's why I was like, I need to go there and check if she's okay. So yeah, the thought of her being gone definitely crossed my mind.”

Valdes grabbed the unconscious woman and began trying to revive her.

“I swam because it was kind of deep, so we couldn't really touch the bottom for the most part. I swam her way,” she said. “I get there, and I tried to get to her face and try to bring her up and lean her against my chest. And she was unconscious, she was not responding and that's when I started talking to her and shaking her a bit and I was like, ‘You're fine. You're fine. You're going to be okay.’ And then I started applying some pressure because I knew she was breathing in water probably. And she had water in her system and that's when I was able to maybe press down a little bit. I'm not exactly sure what I did, but all I know I did something that made her throw up the water or get the water out of her system.

Doniga jumped in the water to help get the woman to shore.

“He sprinted on stairs, all downhill. And then he jumped in the water with me and we both started swimming to the rowing dock, where we were able to hang on into a canoe that was there,” Valdes said. “There was a canoe and when we got her over there the lady reacted a bit. we were hanging by the canoe until the paramedics got in because we could not take her out of the water. She was not very willing to move because everything hurt pretty bad. She was obviously very injured physically. There was a lot of blood, it was kind of graphic. So, we didn't want to move her much because we didn’t know the extent of her injuries.”

The paramedics arrived and took the woman to the hospital, where she is recovering from surgery. Valdes hasn’t heard from the woman but has been in contact with her two daughters.

“That was very emotional,” Valdes said of meeting the woman’s daughters. “The surgery went well and she is going to face recovery for a while. She will be in the hospital for the next few weeks.”

Valdes said she doesn’t feel like a hero – she was just in the right place at the right time.

“It's pretty crazy. The people around, the neighbors were mentioning that she lives alone and that nobody would have heard it,” she said. “We were just so lucky that we were eating outside, because if we were inside, we wouldn't have seen it and we would have just thought it was something in the woods, you know? So, it was just a matter of luck. Like I say, we were just so lucky we were there at that moment and that we were able to react the way we reacted. So, I'm just very grateful for everything that happened that led me to be in that place at that moment.”