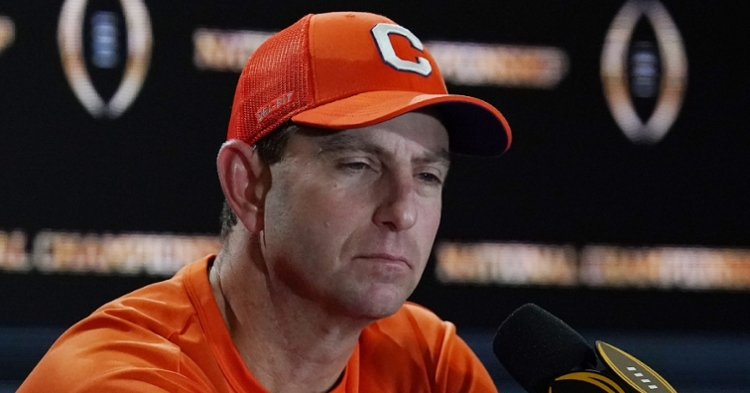 Swinney speaks to the media in the Superdome (Photo: Kirby Lee / USATODAY)

Deep underneath the Louisiana Superdome early Tuesday morning, Clemson head coach Dabo Swinney sat on a podium and answered questions about his team’s loss to LSU in the National Championship. Yes, the loss bothered him. Yes, he was disappointed for the fans, for his coaches, and his players.

But he was whittling away, waiting for the dawn of another day.

Allow me to explain.

In early April of 1862, Ulysses S. Grant and the Union Army were surprised by a strong Confederate attack at a place called Pittsburg Landing. In what would become known as the bloody battle of Shiloh, the Confederate Army wrecked more than one Union Division, pushing the entire army to the river, and its destruction seemed to only await the dawn.

The cabin Grant was using as his headquarters was being used as a makeshift hospital, and after a series of thunderstorms rolled through the area, drenching the wounded, the dead, and the living, Grant found a tree stump and began to whittle on a stick. And think.

Union General William T. Sherman approached Grant and sat down and waited for his commander to speak.

Sherman was fully expecting the Army to retreat, to find a safer space. To lick its wounds and regroup.

Finally, Sherman spoke up, “Well, Grant, we’ve had the devil’s own day, haven’t we?”

A determined Grant, his mind already made up, responded, “Yes, lick ’em to-morrow, though.”

Grant then surprised Sherman and the rest of the generals when he announced that not only were they not going to retreat, they would attack at daylight.

That’s what winners do. You get knocked down, you get back up and resume the attack.

Towards the end of his press conference, Swinney let the disappointment slip away and the competitive fire returned. Swinney hates to lose as much – or maybe more – as he loves to win. He congratulated LSU and instead of complaining about officials or blaming players or the TV networks, he gave the credit where credit was due.

“They made some plays tonight that you just got to tip your hat to them because the ball was in the only place that their guy could catch it. I mean, we had great coverage, and that was championship football, and that's why they're the champions because they made those types of plays, and that's what you've got to do,” Swinney said. “But it was great. I mean, it was very competitive. Our guys competed their tails off, and this will be a painful tape to watch, but one that will help us. It'll help us get back to work and build next year's team.

“You know, I've been on both sides of it. But we have, we've played so many great teams. That Alabama team last year was a great team, but we were a great team, and we were a better team that night. But this team, what they accomplished is really special. Beat a great Ohio State team a couple of weeks ago that I thought was really, really good. But tonight this was LSU's night. I'm happy for their fans. This is a unique situation, to be -- to play a National Championship game basically in your backyard. What a unique opportunity for them, and I thought the environment was amazing. It was a great environment, great crowd, great energy all night from both fan bases.

"Just, again, they earned it and did what they needed to do to win.”

Spring practice starts six weeks from today, and Swinney was ready to get started before he walked off the podium.

Swinney pulled a Grant. He whittled and he thought, he gave credit where it was due, and then announced plans to resume the attack. Again, that’s what winners do.

And then, a final few words.

The attack won’t come at dawn. It starts six weeks from now, and Swinney will do a little more whittling and a little more thinking, and those 80 freshmen and sophomores and the rest of the team, the bitter taste of defeat still in their mouths, will go on the offensive.

After all, they don’t put championship rings on smooth hands.