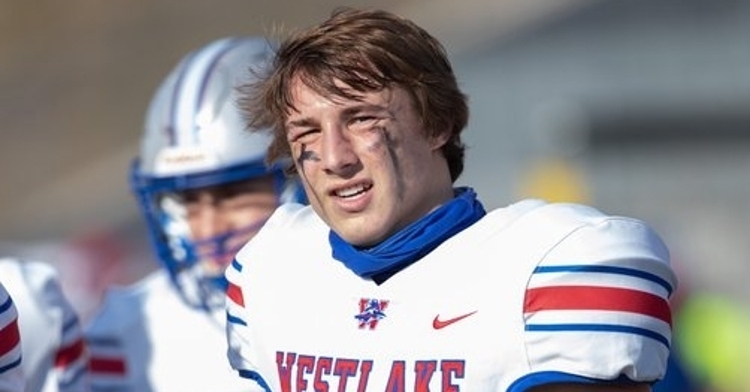 Klubnik is one of the top players in the state of Texas.

No one should question Cade Klubnik’s toughness. No one. Especially after Klubnik, still rehabbing a torn AC joint in his throwing shoulder, threw 250 passes Sunday and earned an invite to the Elite 11 QB competition finals later this summer.

Klubnik competed in the Dallas Elite 11 camp (at Southlake Carroll) on Sunday. The state of Texas is loaded with quarterbacks in the Class of 2022, and Klubnik was one of the three finalists to earn an invite to the Elite 11 Finals later this year. Joining Klubnik as invitees are Ohio State commit Quinn Ewers and Florida commit Nick Evers.

Klubnik’s Austin (TX) Westlake squad outdueled Ewers and Southlake Carroll in the Class 6A Division I state championship in mid-January, and the two are developing a friendly rivalry they hope continues in college.

“I think the first time (playing) against Quinn Ewers was in the sixth grade,” Klubnik told TigerNet. “We have talked about playing against each other in college a little bit more recently. We talked almost the whole time today. That's the first time I've had a real conversation with him. It was pretty fun getting to talk about that and getting to know him and stuff.”

Klubnik said he was thrilled to receive the honor.

“We threw a decent amount. It was good. It's a huge honor,” Klubnik said. “It's something I've always dreamed of doing and playing in one day. It's something I've been working towards for a long time, along with a lot of other things, but that's definitely one of the main ones.”

Klubnik has been rehabbing his shoulder and Sunday represented his first extensive action since the state championship.

“I feel a lot better. I'm really set for spring ball. My shoulder is probably about 85 or 90-percent now,” he said. “I'm getting there. I threw probably 250 balls today, which may be the most ever. We were throwing nonstop for like six hours, which was nuts. I feel good. I'm really excited for spring ball and for the finals. That will be fun. I'm just going to keep getting my stamina up for shoulder. I was getting kind of tired at the end because I've only been throwing for two or three weeks now.”

Klubnik has won a pair of Class 6A championships and won MVP honors in January after completing 18-of-20 passes for 220 yards and a touchdown with another 97 yards and two scores on the ground, all while dealing with the torn AC joint in his throwing shoulder.

“When I got to the sideline, I couldn't pick up my shoulder,” he said. “I ended up toughing it out the first half. I didn't throw great. Then they told me I had a sprained AC joint, which is pretty much a tear of the tendon that connects your collarbone to your rotator cuff in your shoulder. That was on my throwing shoulder, so at halftime, I got a shot and ended up finishing the game.”

However, he wasn’t going to miss the state championship and the matchup with Ewers.

“I couldn't throw that whole week. I literally couldn't throw a ball more than five yards because it hurt so bad,” he said. “I got three shots on the day of the game - two before and one at halftime time. I pretty much got home that day after the game and couldn't pick up my arm. I didn't move it or use it for about a month. I couldn't even lay on it. It's been a long process getting back. I'm really starting to feel like myself again. Being injured, it sucks because you don't know if you're ever going to feel like yourself again because it's such a long process. It's really nice to feel like myself again.

“I rested it for a month. I was pretty much a couch potato just soaking in what we just did for a while. Coach gave us a little bit of time off before we got back to work. Just resting it and letting heal. For two or three weeks, I just worked on my mobility - getting all of it back - because I couldn't raise my hand above my head. Then after that, I started getting strength back. It's a long process but it was all worth it. That's one of those things that can bug you forever so me and my trainers and physical therapists have done a really good job of taking care of it.”

Klubnik made the trek to Clemson two weeks ago for the spring game, and he said that visit cemented the fact that he made the right choice.

No. 10 Seminoles pull away late in series opener