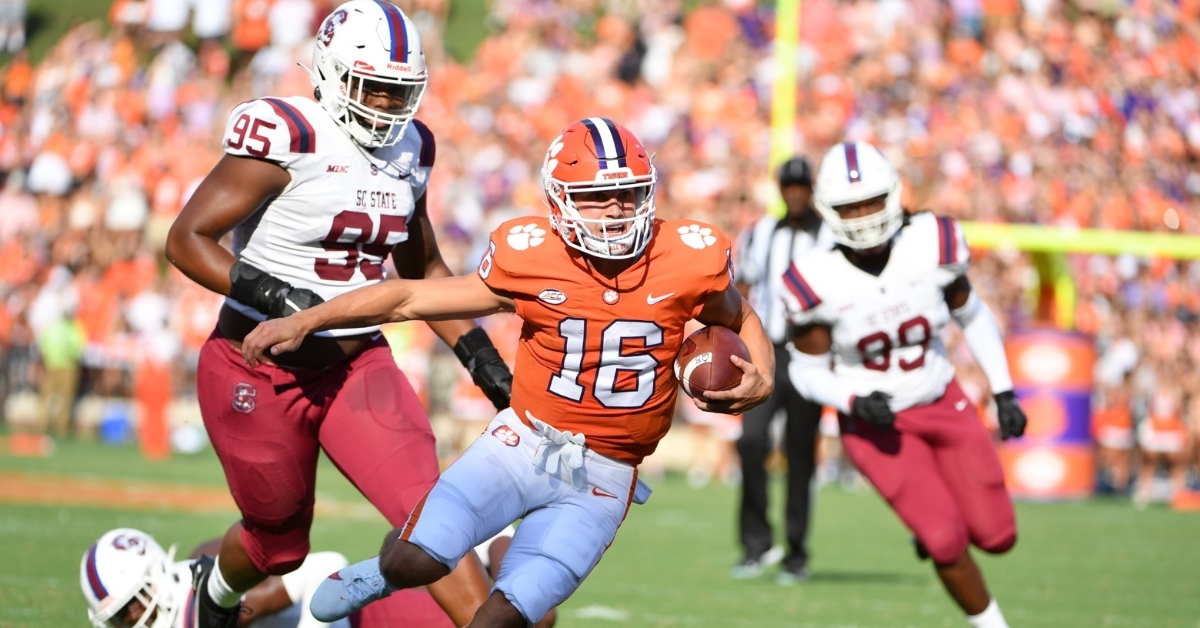 CLEMSON – Will Shipley scored the first two touchdowns of his career and the defense held an offense without a touchdown for the second straight game as No. 6 Clemson defeated SC State 49-3 at Memorial Stadium Saturday evening.

On a day where the nation and the Tigers honored our First Responders – on the 20th anniversary of 9/11 – the Tiger Band and SC State’s Marching 101 combined for a moving tribute at the half.

Clemson improves to 1-1 on the season while SC State falls to 0-2. Clemson hosts Georgia Tech next Saturday at 3:30 pm (network TBA) in the ACC opener for both teams.

Quarterback DJ Uiagalelei ended his day 14-of-24 for 181 yards, one touchdown and one interception. He also had 21 rushing yards and two scores on the ground. Shipley had eight carries for 80 yards and the two scores while Kobe Pace had seven early carries for 68 yards. Lyn-J Dixon added four carries for 27 yards.

Clemson has now won 29 straight home games. Clemson has won 18 straight home openers dating to 2004. That breaks the longest winning streak in home openers all-time (17 from 1944-60). Clemson also improved to 36-0 against Football Championship Subdivision teams since the NCAA formed the division prior to the 1978 season. Clemson also has a national-best 48-1 record at home in the College Football Playoff era (since 2014).

Head coach Dabo Swinney praised the play of his defense.

"We are playing very smart football. Last couple of years we had a lot of busts. We were young in some spots and got exposed with big-play busts," Swinney said. "We are not doing that. A play or two— Nate (Wiggins) gave up a big play. He was in good position. Overall, we have structurally been very good, making the right adjustments, leveraging the football, playing gap football, winning matchups up front, defeating double teams, keeping guys off our 'backers, playing the ball in the air."

The Tigers established the run early. Dixon burst off right tackle for a 16-yard gain on the first play, and the Tigers ran it five more times on the drive with Will Shipley capping it off on an eight-yard scoring run. Barley three minutes into the game Clemson led 7-0.

The Clemson defense forced a 3-and-out on the Bulldogs and took over at their own 38. Shipley once again finished the drive, this time on a seven-yard run, and Clemson led 14-0 midway through the quarter. Will Taylor lined up in the Wildcat on one play and appeared to score on a beautiful 19-yard run that showcased his quickness, but the play was called back because of an illegal block in the back.

Following another SC State punt, the Tigers once again leaned on the ground game with Pace rushing five times for 48 yards. Pace completed the drive with a two-yard scoring run, and with 3:21 remaining in the first quarter Clemson led 21-0.

The defense forced another 3-and-out and on the punt return Taylor danced and weaved his way down the sidelines for 51 yards. The Tigers set up shot at the Bulldog 11 and Uiagalelei hit Justyn Ross in the endzone for the score. With just over two minutes to play in the first quarter Clemson led 28-0.

The teams then traded punts and interceptions and the Tigers didn’t dent the scoreboard again until midway through the second quarter. Shipley started the drive with a 31-yard run and Uiagalelei hit Joseph Ngata for a 38-yard gain on the next play. Five plays later, Uiagalelei followed Shipley’s block into the end zone for a five-yard scoring run. With 6:43 to play in the half Clemson led 35-0.

SC State’s Dyson Roberts hit a 27-yard field goal with 19 seconds remaining and the Tigers took a 35-3 lead into intermission. The Tigers then scored on the first drive of the third quarter. Uiagalelei hit Davis Allen for a 32-yard gain early in the drive and Shipley capped it off with a bruising 13-yard score that made it 42-3.

Taisun Phommachanh entered in the second half and hit 6-of-7 throws on a scoring drive, including a 14-yard TD to Dixon to make it 49-3 with 3:52 left in the third quarter.