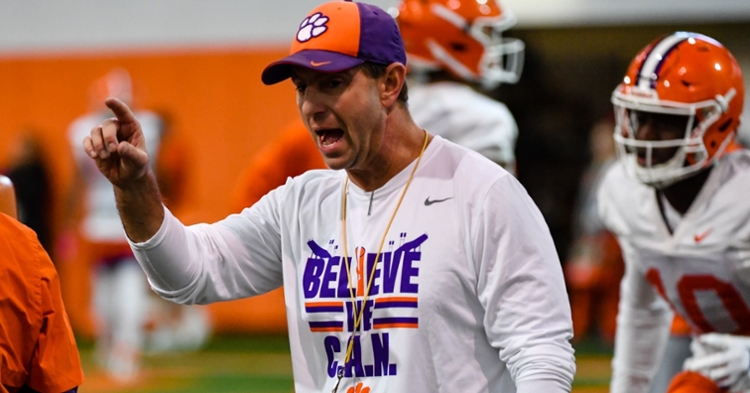 College football is closer than you think.

That’s right, we have our first interviews set up for next week. As of right now, the tentative plan is for us to have the Dabo Swinney media day at the Reeves Complex on Tuesday, July 20th. It has been the Swinney media golf outing in the past, but two years ago we switched it up and held it at the football complex and had media Olympics instead of the golf outing.

It was canceled last year considering everything that went on with COVID, and we missed out on the chance to speak with the assistant coaches. That means it’s now been two years since we’ve been able to do a deep dive with assistants Todd Bates, Lemanski Hall, Mike Reed, Mickey Conn, Robbie Caldwell, and Brandon Streeter. We will still get offensive coordinator Tony Elliott and defensive coordinator Brent Venables, and we have two new faces to sit down and interview this year in Tyler Grisham and CJ Spiller.

I can’t wait to ask Grisham about his wide receivers, Caldwell about depth and what will hopefully be a major step forward for the offensive line this season, Bates and Hall about what might just be the best defensive line in college football, Reed and Conn about the injuries and inconsistency that plagued the secondary last season, Spiller about his stable of backs (and who does he see stepping into a starting role), and Streeter about the depth behind Uiagalelei.

Of course, there will be plenty of questions for both Venables (linebackers) and Elliott (tight ends) and about their units as a whole, and we will likely begin the day with a few comments from the head coach and end the day with a longer press conference that will go into detail about his thoughts on his team and the upcoming season.

The next day, Wednesday the 21st, will see us drive to Charlotte early in the morning for the start of the ACC Football Kickoff. We have the Commissioner’s Forum early (remarks from new commissioner Jim Phillips should be interesting), we will have the officiating and rules forum to talk about rules changes for this year, and then interviews all day with the Coastal Division coaches and players.

It’s always interesting to me to see how the Kickoff has grown. I can remember, even in the early days of Swinney, we would pull up a chair beside the head coach (there would be six or seven of us) and generally just chat with our recorders on. Swinney was overlooked by the entourage that followed Jimbo Fisher and Frank Beamer and Paul Johnson around, and conversations with the players were light and easy. One memory that stands out is Boston College linebacker Luke Kuechly – at Pinehurst in a small room downstairs in the clubhouse of all places – sitting at a table wondering if anyone was going to come over and speak.

Now, with the proliferation of everybody needing to own a website, coaches and players will have 30 or 40 cameras and even more media people surrounding their tables.

We will hear what he (and all the other coaches) have to say in just over a week.