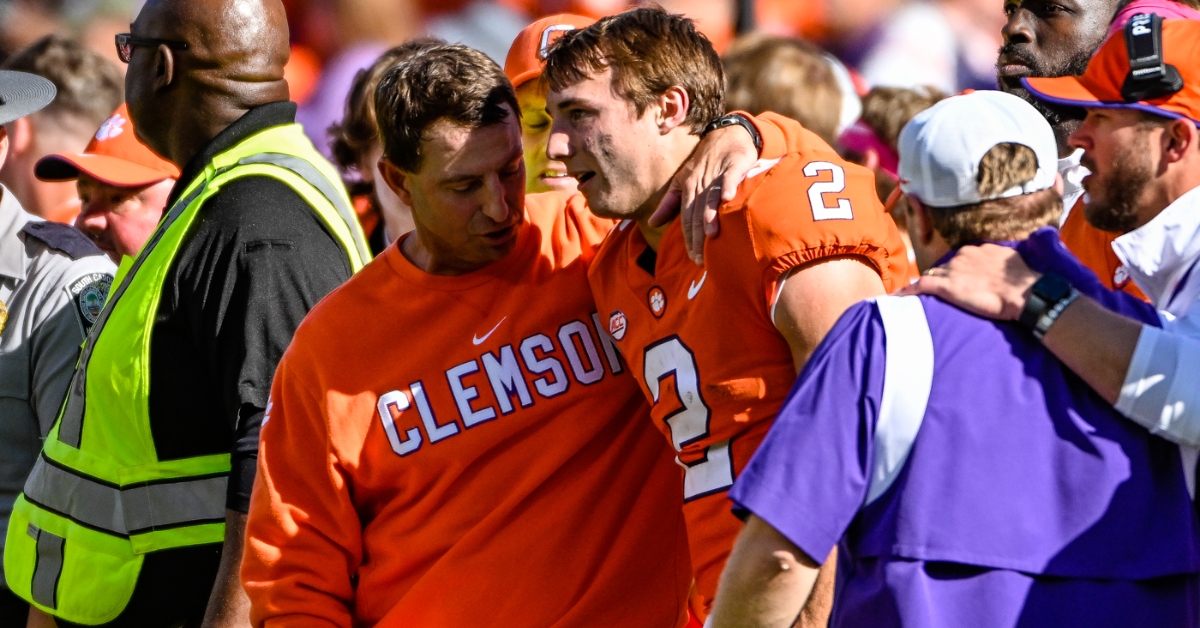 Klubnik helped lead the Tigers to a win over Syracuse in October.

CLEMSON – There is a chance Cade Klubnik plays Saturday against North Carolina.

Head coach Dabo Swinney was unequivocal Sunday afternoon in stating that DJ Uiagalelei would start the ACC Championship Game, which will be held Saturday night in Charlotte’s Bank of America Stadium (kickoff is set for 8 p.m. on ABC).

Uiagalelei struggled (8-for-29 for 99 yards) in last weekend’s loss to South Carolina, but Klubnik, who sits second on the depth chart, didn’t see the field. As Clemson prepares to take on the Tar Heels, offensive coordinator Brandon Streeter left the door open for Klubnik to play.

“We're still talking about that, potentially. DJ has definitely earned it (playing), though, there's no question about it,” Streeter said. “So we're still in discussion about that and how we can utilize Cade. But like I said right now, DJ's no doubt the starter.”

Streeter was visibly upset after the loss Saturday when he was asked if the coaches considered playing Klubnik.

“Heck, yeah, I was upset. Oh my gosh, yesterday was a tough day. I just swallowed that pill, man, it was hard. It was hard. But it’s our job as coaches is to understand, number one, this is a game that you get to regroup and play the next week,” Streeter said. “Fortunately for us, we get to play this week. And I know there's a lot of teams that aren't able to play in championship games, but we're able to put it behind us as quickly as possible and show our players that this is a game.

“And this is a game of football that, heck, we won seven in a row against those guys, and that's hard to do and just really proud of what we've been able to accomplish, even though it hurt really bad on Saturday. And we just got to keep a perspective and understand that we get another opportunity. And how can we show these guys this opportunity? By bouncing back quickly and holding them accountable for the mistakes, holding yourself accountable for mistakes and learning from it. And then let's get ready because we get to go play in a championship game.”

Streeter gave a lot of credit to South Carolina’s defense.

“They did a good job of covering guys, and we didn't do as good of a job getting open,” Streeter said.

“There were a couple of times where we got a little pressure a little bit faster than should have happened and DJ had to try to make some throws with people in his face and that's part of playing quarterback. But there were some opportunities that were definitely big opportunities down the field and we just didn't hold up in protection like we have in the past. There's a couple of breakdowns there that we need to correct.”

“And there were some opportunities, some play calls that were directed to the tight ends that didn't get it to them based on whether it was a sack or tip ball a couple of times, so didn't get them to enough opportunity,” Streeter said. “That's what I could do a better job of, like we did the week before. But there were some plays that were definitely going to them that, based on what the structure was or what happened, it didn't get to them. Even though the game plan and the scheme was to get the ball to them, it just didn't work out on some of those play.”