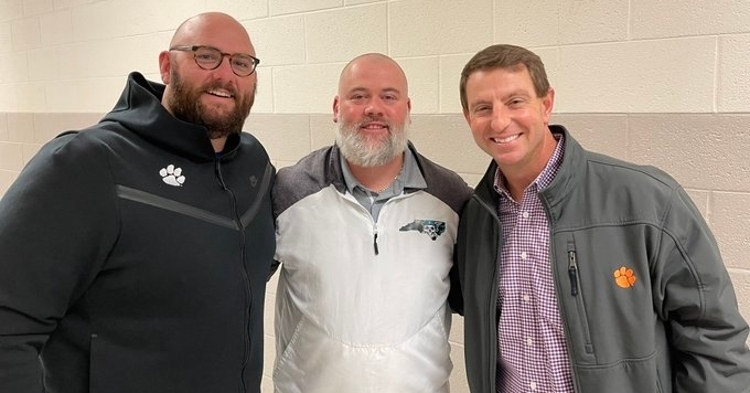 Clemson’s coaches are still out on the road, gaining momentum for the 2023 recruiting cycle.

There is a lot to get to, so let me get it started in Pennsylvania.

New defensive coordinator and linebackers coach Wes Goodwin made the trip to the Keystone State to check in on 2023 4-star linebacker Ta’Mere Robinson out of Pittsburgh (PA) Brashear.

Robinson has offers from Michigan, Notre Dame, Ohio State, Pitt, Southern Cal, Wisconsin, and Texas, among others. Robinson hasn’t yet received a Clemson offer, but that is likely to change once he visits campus for an unofficial visit. I can also tell you that the coaches have asked Robinson to make his way to campus in June for an official visit. Robinson is athletic enough to play safety but many think he projects as a linebacker on the next level, and the fact that Goodwin is recruiting him tells you all you need to know.

*Running back Keith Adams, Jr., has been a frequent visitor to Clemson’s camps, making the trip with his dad and former Clemson linebacker Keith Adams, and he will be back this weekend for another visit. The 2022 prospect has a grayshirt offer.

*Clemson head coach Dabo Swinney is set to go in-home with defensive lineman and 2022 4-star prospect Caden Story tonight. Story was on campus last weekend and Clemson looks to be in good shape.

*Swinney swung through the state of Ohio Wednesday to check in with 2023 OT Luke Montgomery of Findlay (Ohio). Montgomery has offers from Clemson, Southern Cal, Michigan, Notre Dame, and Ohio State, among others. Montgomery’s father told me that his son thinks very highly of Swinney and new offensive line coach Thomas Austin. Austin has been putting in work, traveling all over the country the last few days to visit prospects.

*Swinney and Austin also made the trip to North Carolina to visit with the coaches of 4-star 2023 offensive tackle Sam Pendleton of Pfafftown (NC) Reagan. Pendleton has camped at Clemson and received his offer a little over a week ago.

Coach Josh McGee of Reagan was blown away by Swinney’s visit.

“Anytime Clemson comes into your school it is really special,” McGee told TigerNet. “This was the first time in our school’s history that Coach Swinney made a visit. Having the opportunity to spend a few minutes with him, it is clear to see why Clemson is so successful. Coach Swinney and Coach Austin were such genuine people who truly care about people and relationships.”

Pendleton will be back on campus this weekend for Elite Junior Day (big list coming later).

*A quick note on Kobe McCloud (more from him later as well), who committed to Clemson Wednesday night. I know people get caught up in stars, but in this case, the stars don’t matter. His dad, Ray-Ray McCloud, Sr., wanted to let Kobe’s tape speak for itself (and it’s good) and they stopped going to the Rivals and 247 camps, where the testing is done and stars are handed out based on measurements. Those are important, sure, but watch the film – he’s 220 pounds and can play quarterback, shoots the gap with abandon, and I think he is a future starter.

I know Goodwin wants more athletic guys at linebacker, and McCloud is a great start.

*Tyler Grisham was back in Alabama and stopped in Florence to check in with 2023 cornerback Jahlil Hurley. Hurley has offers from all the major players, but Clemson has yet to dispense one. Hurley stands 6-2, also plays basketball, and has fantastic coverage skills.

*I will end this with another note from Texas. I told you yesterday that the coaches stopped by Permian High School (Friday Night Lights) to check in with 2023 OL prospect Harris Sewell. I spoke with one of the coaches at Permian Wednesday evening to check in on Sewell and ask about the Clemson visit, and we wound up talking about Odessa, Permian, Texas high school football, Clemson, Dabo Swinney, and a host of other subjects. He said a few things I would like to pass along. This is from defensive coordinator Vance Washington.

Washington said having Swinney come in was special, even at a school that is used to having big-name coaches walk through the door.

“That was a big deal, I have to be honest. We do get a lot (of coaches) in, but having him (Swinney) in was a real treat. I was really looking forward to meeting him and he was just as genuine as you would think,” Washington said. “It's like you've known him your entire life. That was a neat deal for us. We really enjoyed having him and Coach Austin and Coach Streeter. They were great, and they texted after they left and invited us up to Clemson to see spring ball and stuff, and hopefully we can get up there to see that.”

Washington said Clemson is making inroads in the state and doing it the right way.

“I think getting Cade (Klubnik) is big haul for them. He is a great player. Making high school coaching relationships is a big deal,” Washington said. “The college coaches here in Texas recruit through us and not the 7-on-7's and all that kind of stuff. They do what is called straight line recruiting. For Coach Swinney to come in personally and recruit one of our boys shows they have a big interest and have a big impact on the kid and the coaches.”

Honored to have HC Dabo Swinney and @Coach__TA from @ClemsonFB in Pfafftown today!!! pic.twitter.com/WWLo2xrnlx

Blessed to have @coachkr10 with @ClemsonFB stop by the Hill today and check in on our prospects. Elite programs understand how important relationships are. Clemson gets it! @ForestHillsFBNC #ACC pic.twitter.com/j1ug7aH4bw