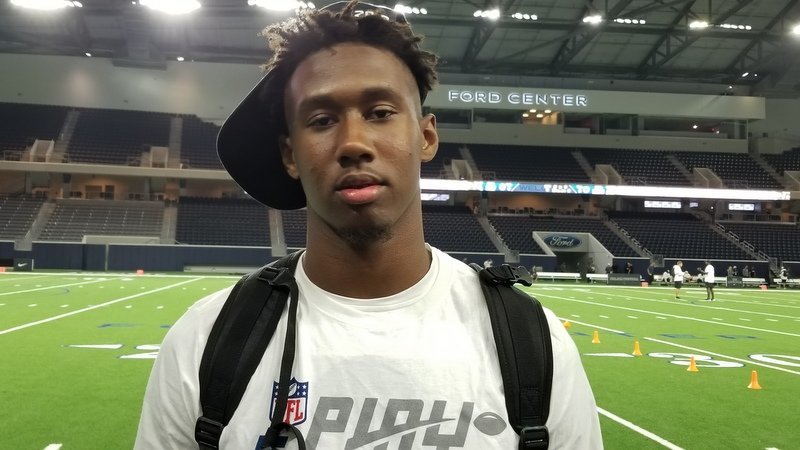 Ladson talks to the media at The Opening Saturday

Frank Ladson spent time learning from the best wide receiver coach in the country in early June and now he’s taking those lessons to the field against some of the top talent in the country.

The 5-star Miami (FL) South Dade wide receiver and Clemson commit attended head Coach Dabo Swinney’s high school camp at the beginning of June and is now in Frisco (TX) for Nike’s The Opening Finals competing against the best prospects high school football has to offer.

Ladson spoke exclusively with TigerNet Saturday afternoon at The Star – Dallas Cowboys world headquarters – and said his time at Swinney’s camp was invaluable.

“On day one, he (Swinney) was actually over there with me during one-on-ones,” Ladson told TigerNet Saturday afternoon. “He was looking at some of my routes and telling me how to run it and giving me some tips. It's great that he was working with me. He and Coach Scott are just so smart. They really know football and they know how to get open and how to play football.

“He (co-offensive coordinator Jeff Scott) and Coach Swinney really talked to me a lot. They were really working with me. I worked with Tee Higgins and they players treated me like family and like I'm already part of the receiving corps. They were really helping me out, teaching me about my stance and teaching me all of the little things.”

Just as Ladson is no stranger to Clemson’s campus, he’s also fond of playing at The Star and in the Dallas Cowboys complex.

“This is actually my second time here. I was here for a combine last year. I feel good here. I had a one-handed catch here so I like playing here,” Ladson said.

Ladson said he hopes to continue learning from some of the best coaches and players in the country while in Texas.

“I got here Friday morning. This has been great so far,” Ladson said. “It has been a great experience. Being around a lot of talented guys, I'm learning a lot. While we're doing drills and whatnot, I'm learning a lot from the other guys. I'm just listening to the coaches and paying attention to the little details that will make me better.”

While Ladson is looking forward to having fun at The Opening, he also arrived in the Lone Star State with a bit of chip on his shoulder.

Just as any of the players at The Opening, Ladson is also looking forward to the swag and gear that comes along with being invited to the finals.

“We have customized cleats, so I can't wait for those to come out,” he said. “I put 305 on mine because that's where I'm from - Dade County. I put the Nike check and a few other things on there.”