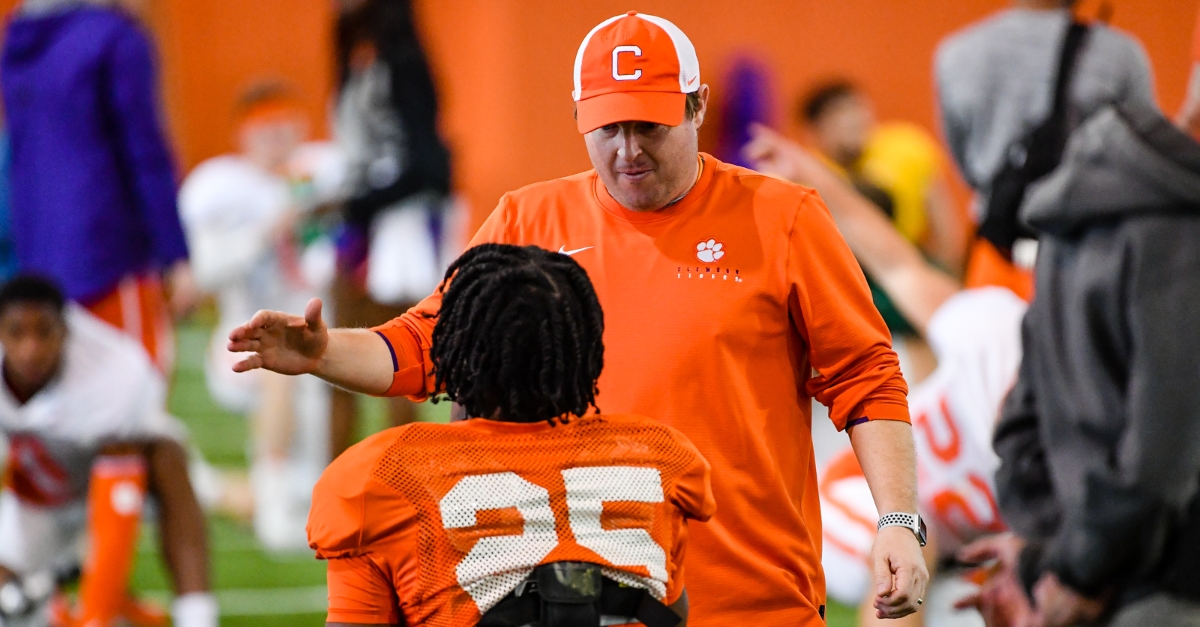 This will be Wes Goodwin's first spring as defensive coordinator.

Raise your hand if you’re excited about the start of spring practice.

When Clemson begins spring practice Wednesday there will be a lot of new faces and differences that will take a while to get used to. Gone are some familiar voices – whether it’s former defensive coordinator Brent Venables or linebacker James Skalski – and everyone will be watching to see what new voices will demand to be heard.

Yes, as talented as this team is (and it is talented), last season’s 10-3 mark left a lot of people wondering about the direction of the program and whether it can once again ascend to the mountaintop. That means we have questions and we have things we will be looking for when it all gets started a little after 4 pm.

Can a motivated DJ Uiagalelei hold off Cade Klubnik?

Ok, let’s get one thing out of the way – Uiagalelei will exit the spring atop the depth chart. With just two chances for full-contact scrimmages prior to the spring game, I just don’t see any way we see any movement from that top spot. The biggest question will be what we see with our own eyes – does Klubnik look the part, and will he be ready to challenge for a starting spot in the fall?

Uiagalelei looks noticeably slimmer in some videos we’ve seen, and he drew rave reviews at a quarterback camp a few weeks ago. People close to Uiagalelei have told me that he’s as motivated as he’s ever been, and he’s looking to cement his status as the starter. This battle – such as it is in the spring – will be fun to watch. 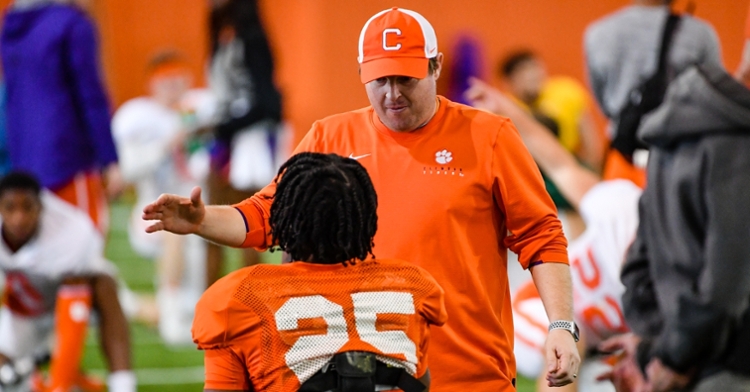 This will be Wes Goodwin's first spring as defensive coordinator. "

Who steps up as a defensive leader

It was not uncommon to see Skalski and even safety Nolan Turner not participating in practice. Both players would shuck their pads and act as coaches, saving their bodies for game day. Both were vocal leaders and weren’t afraid to speak their mind. But both have moved on, and that leaves a bit of a void on the defensive side of the ball.

Safety Andrew Mukuba is already taking on that leadership role, and he will be a force in the locker room. Guys like Bryan Bresee and Myles Murphy and KJ Henry are all capable of leading from the front. But the guy I think that has the best chance to step in that Skalski role is linebacker Trenton Simpson.

Simpson ranked third on the team with 78 tackles and finished second in both tackles for loss (12.0) and sacks (6.0) while also adding three pass breakups over 556 snaps in 13 games (12 starts). He’s talented, he’s well-liked, he knows the defense, and he has all of the intangibles to be “the guy.”

How does Thomas Austin fill out the center and guard spots?

Hunter Rayburn was supposed to challenge for a spot at either guard or center this spring, but he was forced to retire from the game earlier this month. Clemson started three different centers last season and changed the left guard spot six different times with four different players.

Mason Trotter and Trent Howard will get the first crack at center with redshirt freshman Ryan Linthicum in the mix. Sophomore Marcus Tate was inconsistent at the left guard spot last season and he was benched twice, but he found himself starting at the end of the season.

Add in some players who missed last season because of injury or because they needed to get stronger – like Dietrick Pennington and Tristan Leigh – and competition in the middle of the line should be fierce.

Who takes over for Mario Goodrich and Andrew Booth at corner?

Booth and Goodrich were one of the best corner tandems in the country last season, and it was no surprise when both went on to the NFL. Veteran Sheridan Jones should be the early favorite to step into a starting spot after playing more than 400 snaps last season.

Nate Wiggins, Fred Davis, and Malcolm Greene all have a shot, but I expect Greene to play more at the Nickel/SAM spot. Davis played just 137 snaps over nine games last season after playing 183 snaps as a freshman. He has the talent and the pedigree, but Davis has to show he’s consistent enough to take the job.

How are all the new coaches going to fit in?

Yes, we had the bowl game with the new faces, but this will be the first extended look at defensive tackles coach Nick Eason, linebackers coach and co-defensive coordinator Wes Goodwin, offensive line coach Thomas Austin, Brandon Streeter as the offensive coordinator, and Kyle Richardson as the tight ends coach. That’s a lot of new job titles for some people, and this will our first real chance to see the entire group in action.