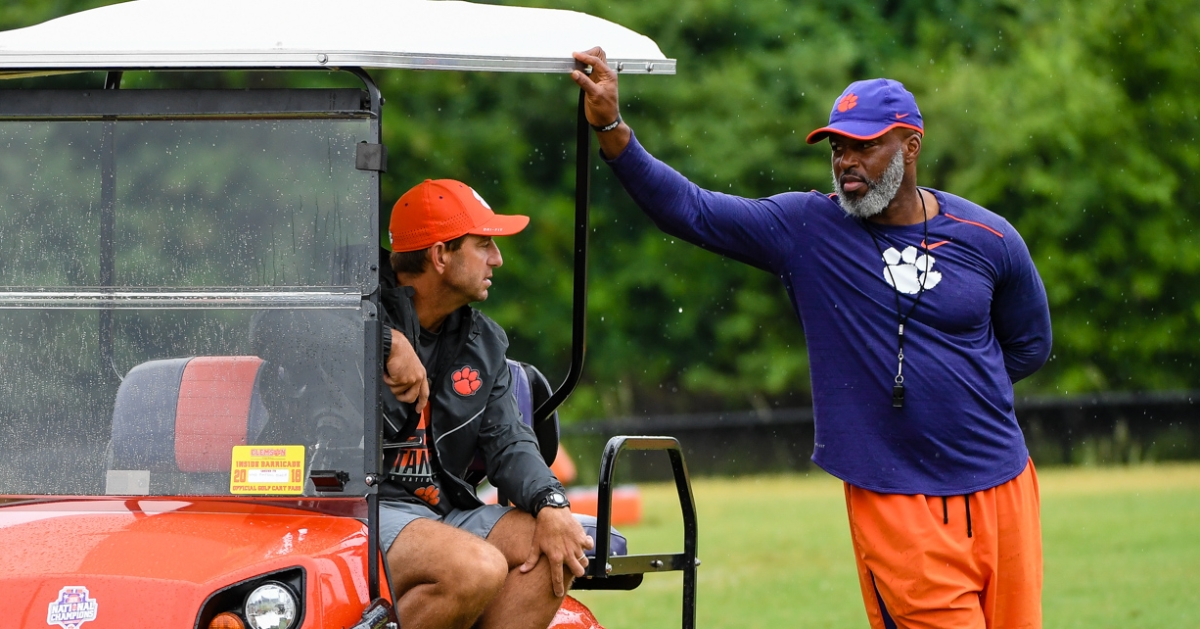 Hall (right) might have to replace four talented players after this season.

CLEMSON – Defensive ends coach Lemanski Hall played the part of the bachelor following Monday’s practice, making an impassioned plea to the top defensive end recruits in the country while hoping one of them accepts his proposal and makes it to the altar.

Hall mentioned earlier in the interview that he could lose as many as four defensive ends at the end of this season – Xavier Thomas, KJ Henry, and Justin Mascoll will have exhausted their eligibility while any type of productive season from junior Myles Murphy could catapult him into the conversation for the NFL Draft.

Hall has mentioned that he wants to take three players at his position – for now – and has been working hard to make sure he has adequate replacements for those players, offering eight pure edge rushers for the 2023 recruiting cycle. The Tigers handed out five offers in the month of March, and Hall said the importance of closing the right guys can’t be overstated.

"Oh man, it’s critical,” Hall told TigerNet. “We talk about I’m losing dudes, so I have to bring some dudes in. So, I’ve identified some guys that fit our culture and fit my personality, fit the description of what I’m looking for at that position.”

I asked Hall what his message would be to the top players in the country, and he didn’t mince words, suggesting that early playing time is there for the taking.

“Right now, if you’re a recruit out there, man and you want to play at a big-time place and you want to have an opportunity to play right now, this is the perfect spot, right? Obviously, I’m never gonna tell a kid, ‘You’re gonna start,’ but man, if you come here, we’re losing four guys and I’m needing guys,” Hall said. “I’m looking for some plug-and-play guys. If I’m a recruit, this is the place that I would want to be.”

Hall said he needs players who are ready from day one.

“I am looking for some plug-and-play guys,” he said. “Like right now, day one, that can come in and execute and play at a very high level.”

He was asked if the transfer portal is a possibility, and he said that isn’t something he pays attention to, instead focusing on high school recruits.

“I leave that to Coach (Dabo) Swinney, Coach (Danny) Pearman, and those guys. I am out there recruiting high school kids and working my butt off to get the ones that fit our program and fit the description of what I am looking for,” Hall said. “We found those guys and now we just have to get them to the altar. We have to get one to commit. If I get one to commit, I will feel good about the other two and getting them to commit.”