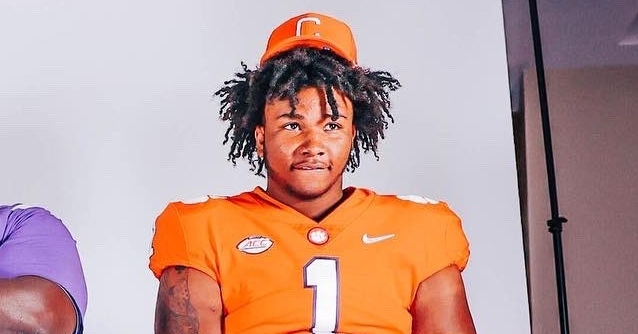 Stephiylan Green was among the highly-prized commits this summer.

CLEMSON – The decision to bring in recruits for an official visit in early June has paid dividends for head coach Dabo Swinney and the Clemson coaches.

The Tigers brought in 31 players on officials during the first weekend in June, a dramatic change from a previous policy of only allowing unofficial visits and saving official visits for the fall. The change worked as Clemson picked up a double-digit haul of commits from the weekend visitors alone plus more, giving the Tigers one of the top-ranked recruiting classes in the country.

“Well, we did one visit. You can do visits all of April, all of May, and all of June. The only change we made is we made the Elite Retreat (a past Clemson recruiting event) into just an official,” Swinney said. “And the only reason we did that is because all the kids had already been here. So, we didn't bring anybody in here. Well, I take that back. We brought 31 kids in. We only brought one guy in here who hadn't been to Clemson.

Swinney said getting players back on campus – a change from two years of COVID – has proven to be a boon for recruiting.

“If you go back to COVID, nobody could get out to campus. That was the big difference. We went a long while where nobody could come in,” Swinney said. “All of this class have had multiple opportunities to come. So that was a little change. And again, you can do visits all of April and all of May and all of June, but we've just chosen not to do that. And we've really taken the same approach. We really hadn't change anything. We've taken the same approach and continue to promote the things that make Clemson Clemson and find the kids that fit and value the same things that we offer here.”

He then acknowledged that the weekend turned out to be better than expected.

“That weekend was awesome for us. And really by September 1, we're going to be about where we have been going back the last eight years,” Swinney said. “We're exactly where we've always been from a class percentage. Some classes are bigger than others, but the percentage of guys of your class that are coming already committed, so I don't see any difference there. But our approach has been the same, and we got a great recruiting class that's coming together.”