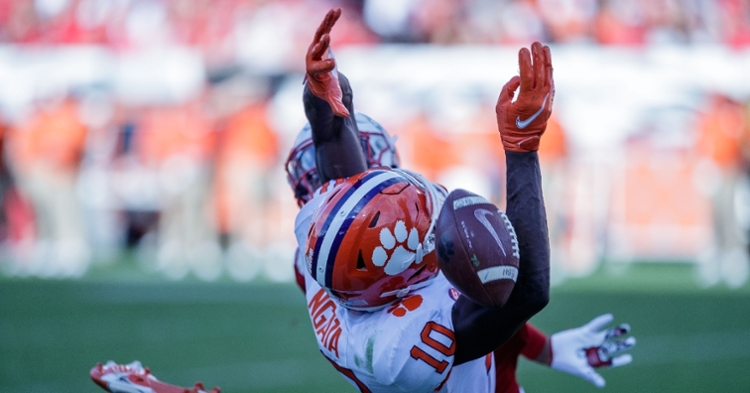 Clemson's receivers have missed on some of their opportunities.

CLEMSON – If Clemson’s offense is to make the kind of turnaround the coaches want and the fans expect, it’s going to take more than two wide receivers making plays. And it will take quarterback DJ Uiagalelei getting them the football.

The Clemson passing game is mired at the bottom of the NCAA statistical standings, a new and strange place for an offense that is used to putting up big numbers through the air. The Tigers finished sixth in passing in 2020, 23rd in 2019, and 21st in 2018. This year Clemson entered the weekend ranked 116th nationally out of 130 teams, averaging only 176.8 yards per game through the air. The Tigers are also averaging just 5.4 yards per attempt, “good” for 120th in the country this week.

That’s right, Clemson’s passing game is currently hanging out with the likes of Kansas and Old Dominion, and UConn. That isn’t the neighborhood where you want to be.

Clemson also ranked 81st nationally in drop rate going into the weekend, averaging a drop on 8.4% of attempts.

However, head coach Dabo Swinney has said that it's more about the coverages the Tigers are seeing, as well as injuries.

"The first few games, we played against drop-8 so you're not going to line up and throw the ball. That's first and foremost," Swinney said. "And then it's just been guys banged up. Frank Ladson tried to go and couldn't. Joe Ngata has been solid this year, with just a few drops. (Justyn) Ross has been very solid. Good to get Beaux Collins that good amount of work.”

Ngata is the only Clemson receiver that ranked in the top 100 nationally, averaging around 66 yards per game, but he’s done that on just 17 receptions. Ross leads the Tigers with 23 catches but after that? Not a lot going on.

Running back Kobe Pace has the third-most yards on the team, and he has just 64 on four receptions. Tight end Davis Allen is third in receptions with six, but that’s just for 45 yards. The rest of Clemson’s receivers have a combined 20 catches.

Swinney pointed to the drops and to Uiagalelei missing wide-open targets.

“We’ve got guys open. We have to catch the ball and we have to hit them, and once we do that consistently, you won't be asking me that question,” Swinney told me earlier this week. “We are either not catching it, or we're open and not hitting them. It's a combination. Again, we took a step forward the other night but nowhere near where we need to be."

What is the answer? Swinney said the Tigers have to simply keep going to work and trying to get better.

“The biggest thing is to keep grinding, keep working at it. It's going to happen. It's going to come. DJ made some great throws on the money,” Swinney said. “I can think of four off the top of my head that were easy plays and we didn't make them (at wideout). And then he had three easy plays on his part and he didn't make them. That's seven or eight plays right there that lead to first downs, momentum, you name it. Just keep going man. Just keep practicing."