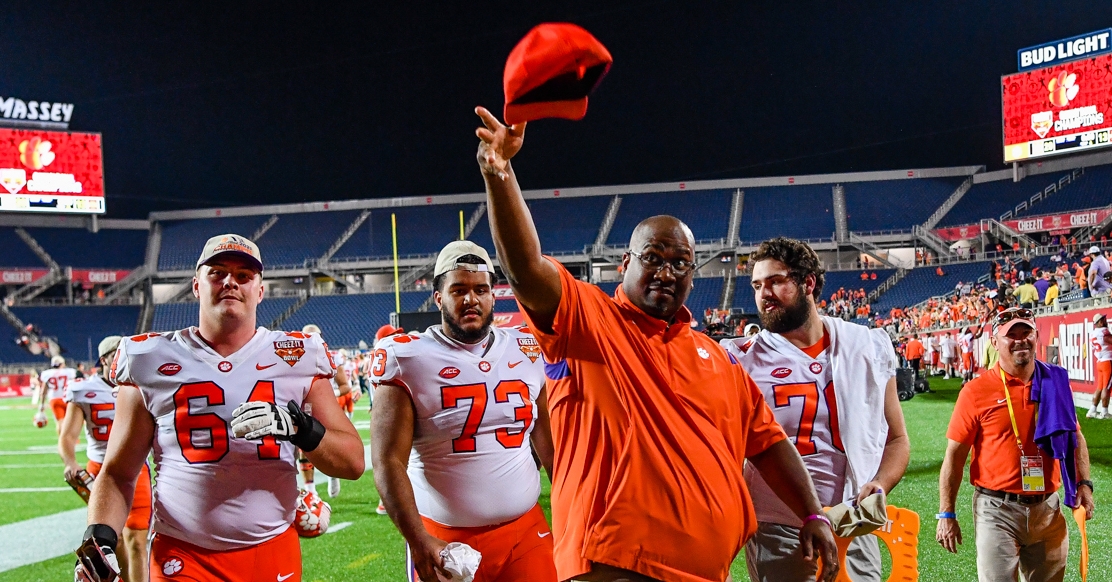 Todd Bates is headed to Oklahoma.

There have been a lot of shocks and surprises since the Tigers walloped South Carolina in the annual rivalry game in late November, perhaps none bigger than Todd Bates leaving Clemson for Oklahoma.

Not that the move – Clemson’s assistant head coach, recruiting coordinator, and defensive tackles coach heading to Norman to become Brent Venables’ co-defensive coordinator – is a terrible move. Or that it doesn’t make sense on some levels. It was just completely out of the proverbial left field and unexpected.

I first got wind of it late Sunday when a text arrived asking if I had heard anything about it – I hadn’t – and if I’ve learned anything over the years it’s that about one percent of message boards rumors are true. I have one friend who haunts another message board, a place where everybody has a source and they are constantly having contests to see who has the better info – and I usually have to disappoint him and tell I don’t see Nick Saban coming here as the linebackers coach or Tyler Grisham becoming the next head coach of the Philadelphia Eagles.

But this one was interesting, and some follow-up Monday showed there was some fire with the smoke, and a text message from a source within the program confirmed the news. Someone asked if perhaps a deal had been worked out beforehand and that Swinney wanted Bates to coach the bowl game, but if that was the case, we wouldn’t have had a press conference a few weeks ago where Swinney gave Bates the new title, a big raise, and some glowing reviews.

“Todd Bates is a future head coach,” Swinney said at the time. “And he’s going to be a great head coach. He’s special. He’s got that gift. He’s got whatever that is, that you have to have I think to be a head coach, Todd Bates exemplifies every possible thing you could possibly want. He has a great understanding of the game. He’s young. He just gets it at all levels.

“Him moving into a leadership role is going to really help me and lean on him with a lot of head coach things. Again, Collaboration and discussion. I’m excited about Todd be able to step into that role. What an unbelievable job he has done and somebody that I had a lot of trust in, his opinion, everything. He’s also our recruiting coordinator. He’ll be a head coach sooner or later one of these days, no doubt about it to me.”

If Bates wants to be a head coach, perhaps he thinks the title of co-defensive coordinator will get him there a little quicker. With Wes Goodwin and Mickey Conn in place here, and likely loyal to Swinney, perhaps he saw the opportunities here as limited. Maybe he didn’t like being passed over. I don’t know if any of that is true, just surmising, but it would make some sort of sense.

Of course, the news was followed by the usual wailing and screaming and those predicting the doom and gloom. But as I cautioned after the Venables and Elliott news, coaches come and go, and you have to trust the man that’s won two titles to make the right choice. If you don’t, and know that this is headed in the wrong direction, that’s ok, too. You’re entitled to your opinion.

The bigger question is …which direction does Swinney go with the hire? From everything I’ve heard, this looks like it will be an outside hire, the first one since he plucked Bates away from Jacksonville St. Perhaps former Clemson player Nick Eason, now with Auburn, would be interested. An All-ACC defensive lineman at Clemson, Eason played in the NFL from 2003-12 before coaching D-line for the Browns, Titans and Bengals from 2013-20.

Another name that pops up is Brentson Buckner, but he’s never recruited and with his son now playing at Oregon, I’ve heard he would like to stay out West.

One thing is for sure, however – this hire needs to be a home run. This one has to be smashed like a Hank Aaron blast. This is important from a perception standpoint and even more importantly, from a recruiting standpoint.

If you peruse the Tigers’ commitment list, you will see no defensive line commits. This is an area of need and someone needs to come in and make inroads right away. As in, tomorrow.

Swinney is on the clock, and as we hear info we will pass it along.