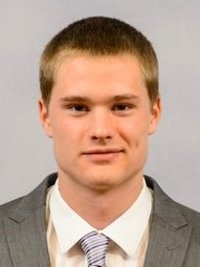 Linebacker
B I O
Key special teams contributor early in his career who earned a starting role as a fifth-year senior … Entered 2019 bowl season credited with 142 tackles, 9.0 tackles for loss, 5.0 sacks, an interception, a pass breakup, three forced fumbles and two fumble recoveries in 797 snaps over 56 games (13 starts) in his career.