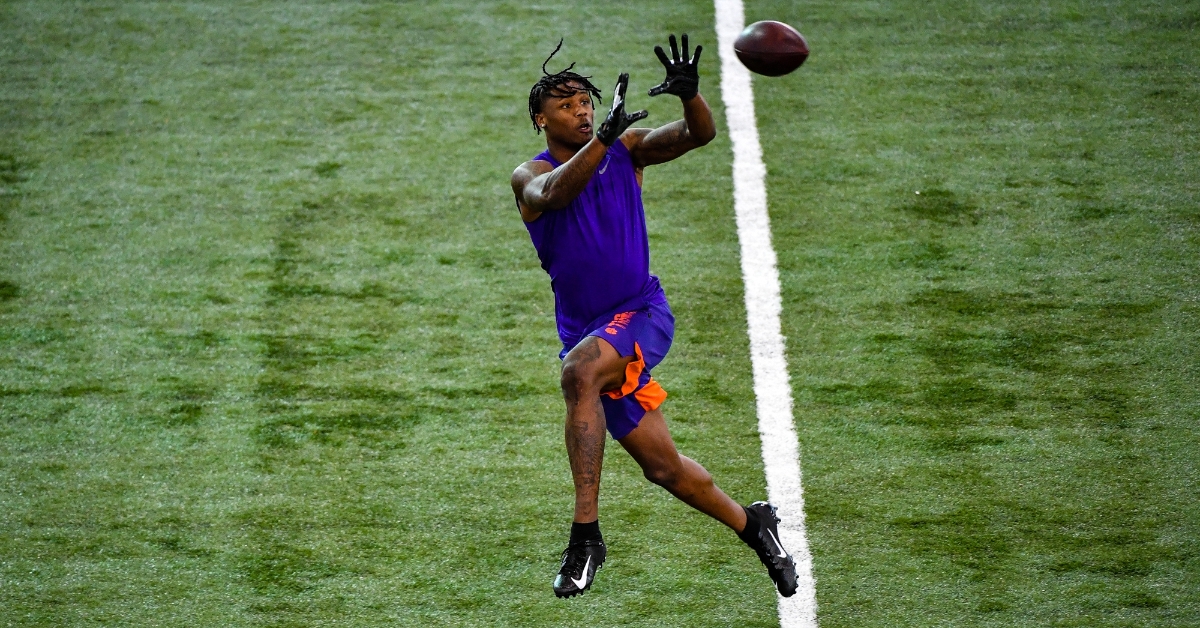 Tee Higgins caught every pass in the receiver workout.

CLEMSON – With two potential first round draft picks in attendance, NFL personnel were out in force for Clemson’s annual Pro Day.

“I thought they all did a nice job. It's a great day for the program and a special day for them,” Swinney said. “A lot of their families are here and it's always great to visit with the families a little bit. But now the Underwear Olympics are over and I think it's a big relief to these guys to be able to just get back to football and get back to position work and put their eyes on the tape. Because you have to be able to play the game. But I thought they all did really well and solidified an opportunity and that is all you can ask for is to get a good opportunity.”

Swinney then said that all a player needs is a chance.

“Very people get an opportunity to go to that level and I think the majority of the guys in there are going to get that shot,” he said. “Some will hear their names called in the draft and some will sign as free agents. But history shows that if you get the opportunity then you have a chance to make it., We have had 109 guys since I've been the head coach that have gotten an opportunity and 80-percent have made it. At least made the practice squad, and that's not normal, that's pretty rare. Especially considering that 7-percent of college players play in the NFL. So, we average 10 a year or so that have a chance and it will be about the same this year.”

Swinney was asked about Higgins’ times in the 40 and he said football speed is what matters.

"I think he is really, really fast with his straight-line speed. He ran in the 4.5s,” Swinney said. “The difference in 4.54 and 4.44, it is almost impossible to (get it with a hand held watch). That gets the technicality of a star. He is not a track guy. He has never run track. But put him in a receivers stance and line him up against everybody else and see how it ends. He can run with anybody.

"He is elite in every way. He has excellent top in speed. Freaky ball skills and unbelievable size. Collision balance, radius, high football IQ, great character, high coach ability. He is the complete package."

Swinney was asked about the coronavirus and the stoppage of sporting events and he said a decision will made on the rest of spring practice at a later date.

“Not yet. We will talk about it. The good `news for us is we've already had nine spring practices and an extended scrimmage yesterday so we've gotten a lot of work done,” Swinney said. “If we don't have another practice I feel good about what we've been able to get done. We will respond and get a plan together based on the direction from our leadership and we will go from there. The biggest thing is making sure that everybody is safe and there are no issues and we can do the e-learning and we can finish the semester. That is just where we are right now, and I am thankful we have spring break coming up and we don't have to process anything as far as next steps.”

Nothing is known on the spring game as result.

“I am sure I will have a conversation later on today with Dan (Radakovich) and we will go from there. That won't be my decision,” Swinney said. “There are committees and groups that make those decisions and we will roll with it.”