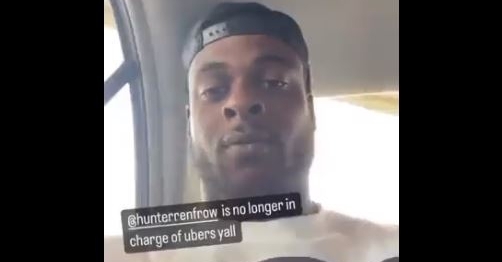 Adams was squeezed in the backseat with two of his teammates

Uber can be a game changer when you don't have a car and need one quickly.

However, they also can be a tight fit for large groups, especially if it shows up as a small sedan.

This was the case Wednesday as Hunter Renfrow, and his teammates WR Davante Adams, WR Mack Hollins, and QB Derek Car rode to Topgolf in a tiny car for their four NFL-sized bodies.

Adams posted on Instagram a short video of them getting into the car and added a description, "Hunter Renfrow is no longer in charger of ubers yall."

During the video, you can see Renfrow's teammates laughing at him for how snug they were in the backseat. Obviously, his teammates are just giving him a hard time as you can tell how much they like him.

Logically, Adams should probably order and pay for the Uber XLs if he needs more room because he signed a new five-year, $141.25 million deal this past offseason.

You know @renfrowhunter, there are bigger Ubers 😂