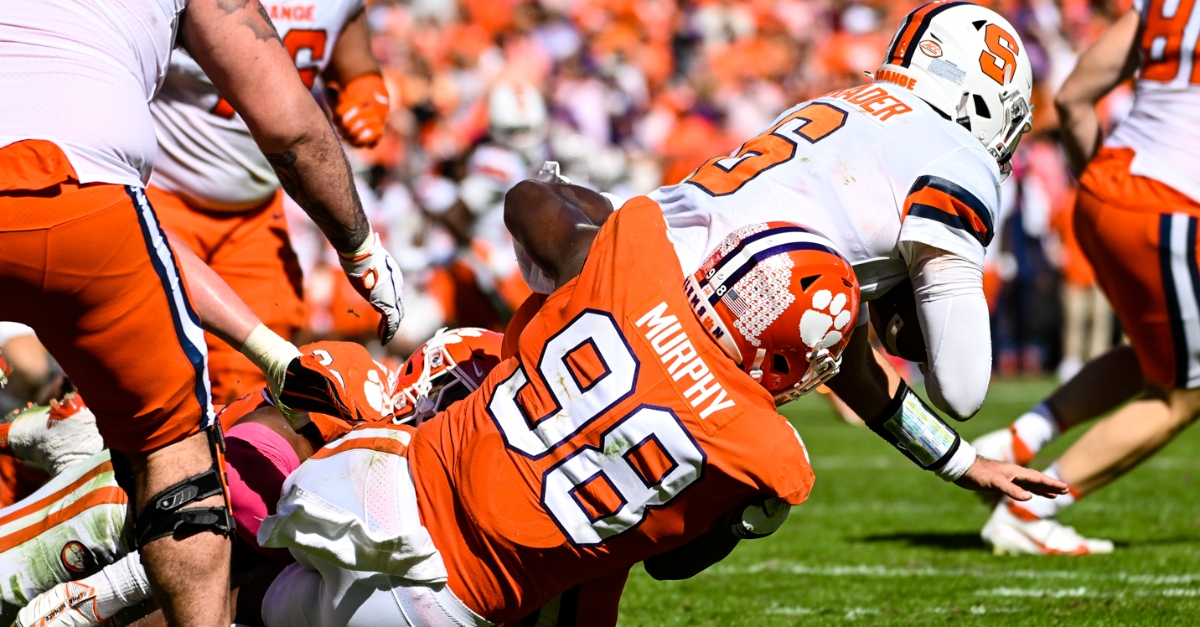 Myles Murphy is rated as the No. 2 defensive end in the class by Kiper and picked to go in the top-10.

Murphy is pegged as the No. 8 overall selection by his home-state Atlanta Falcons, pairing up with another former Tigers defensive standout.

"The Falcons had just 21 sacks this season, which ranked 31st in the league," Kiper said, "and they were led by Grady Jarrett's six. Veteran edge rusher Lorenzo Carter added four, while rookie second-round pick Arnold Ebiketie had 2.5. No other player had more than two. They have to get better along the front seven. That could start here with Murphy, a complete defender who had 17.5 sacks in three seasons at Clemson. He could even kick inside to tackle on passing downs.

"Atlanta is another team with questions at quarterback, as rookie third-rounder Desmond Ridder flashed at times at the end of the season. He's not a lock to be the Week 1 starter, though I expect the organization to do deep evaluations on this draft class and bring in another player to compete with him. For now, however, Murphy is too good to pass up."

While not projected as one of the top-31 picks, Bryan Bresee is mentioned as a possible selection for the Dallas Cowboys at No. 26.

Bresee is ranked as the third-best defensive tackle in the draft class.

Other Clemson prospect rankings include Trenton Simpson as the No. 2 linebacker, Davis Allen as the No. 7 tight end, Jordan McFadden as the No. 9 guard and KJ Henry among those who "just missed" in the defensive ends category.

Murphy also displays a lot of power at the point of attack and offers a nasty long-arm that can overwhelm tackles. This is one of my favorite players in the draft. pic.twitter.com/FIklWmPDwX

ESPN analyst predicts the top freshman for the Tigers