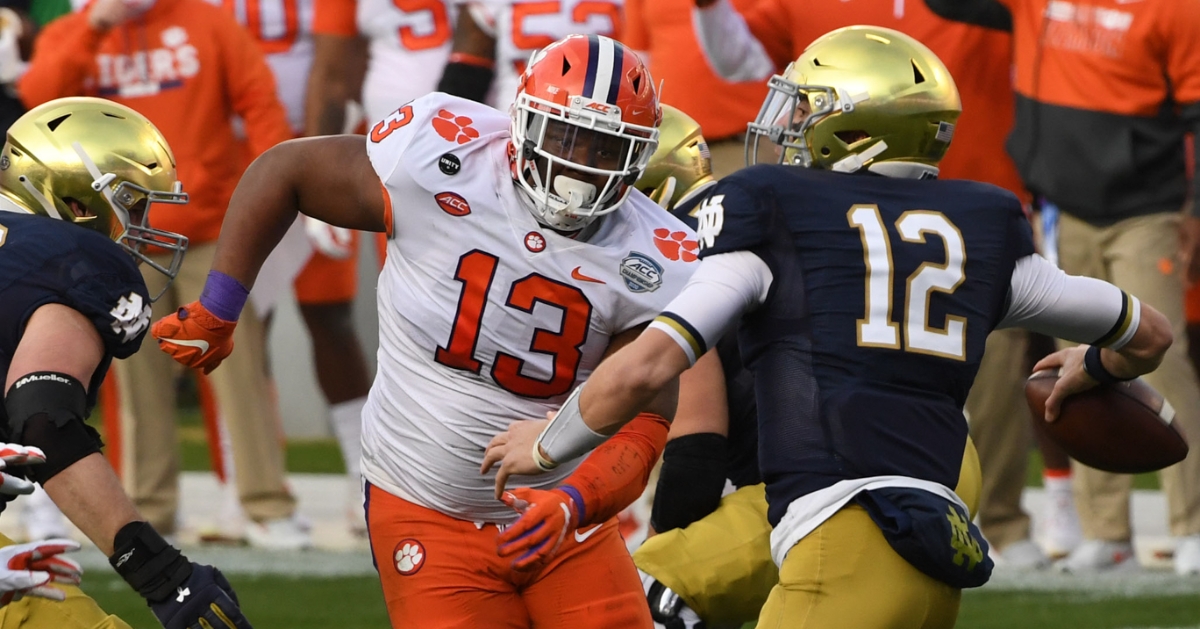 Tyler Davis is one of the top veteran defensive lineman back in the nation.

While not regarded as a NFL draft first-round pick, not many analysts thought that stalwart Clemson defensive tackle Tyler Davis would return for another college season.

Davis instead opted to use the waiver from the 2020 COVID season to lead the interior of the Tigers' D-line again in 2023.

CBS Sports ranked him as the 11th-best player overall and the fifth-best defender to return to the college game this season.

"Davis is one of the most experienced defensive linemen in the country, and he chose to return to the Tigers for his 'super senior' season," CBS Sports' Barrett Sallee writes. "He has 26.5 tackles for loss and 15.5 sacks during his tenure with Clemson despite fighting through multiple injuries. He will anchor a veteran defensive line that should be one of the nation's best."

Made an immediate impact, earning the starting role in his first career game as a true freshman in 2019 and becoming a key interior piece for Clemson’s defense ever since … three-time All-ACC selection, including back-to-back first-team honors in 2021 and 2022 … credited with 122 tackles (26.0 for loss), 15.5 sacks, four pass breakups and three fumble recoveries in 1,551 snaps over 43 games (39 starts).

2022: Voted by his teammates as a permanent team captain … earned second-team All-America honors from the FWAA and Phil Steele … Bednarik Award semifinalist … first-team All-ACC selection … also garnered first-team All-ACC honors from the AP and Phil Steele … second-team All-ACC selection by Pro Football Focus … started 11 of the 12 games in which he appeared, finishing credited with 27 tackles (9.5 for loss), 5.5 sacks, a pass breakup and a fumble recovery in 495 snaps … recorded two tackles at Georgia Tech … after missing two games, contributed six tackles (2.5 for loss) with 1.5 sacks at No. 21 Wake Forest to earn team defensive player of the game … had a half-sack among his two tackles (1.5 for loss) vs. No. 10 NC State, sharing team defensive player of the game honors … credited two tackles (0.5 for loss) and five quarterback hurries at Boston College … added one tackle at Florida State … notched a career-high 2.0 sacks amid his four tackles (2.5 for loss) vs. No. 14 Syracuse … had a tackle and a pass breakup at Notre Dame … contributed two tackles vs. Louisville … added two tackles vs. South Carolina … collected two tackles (1.5 for loss) with a half-sack vs. No. 24 North Carolina … posted three tackles with a sack in the Orange Bowl vs. No. 6 Tennessee.

2021: First-team All-ACC selection despite battling injuries during the season … also collected second-team All-ACC honors from the Associated Press … credited with 27 tackles (2.5 for loss), 2.5 sacks and a fumble recovery over 321 snaps in nine games (eight starts) … Clemson was 8-0 in games he started and 2-3 in games in which he did not play (Georgia, NC State, Boston College and Syracuse) or was limited to playing on a snap count in a reserve role (Pitt) … made season debut with one tackle vs. SC State … credited with seven tackles vs. Georgia Tech … missed three games with a torn bicep but returned at No. 23 Pitt, making three tackles … notched a half-sack among his four tackles vs. Florida State … made one tackle at Louisville … had a nine-yard sack among his two tackles vs. UConn … contributed three tackles (one for loss) with a sack and a fumble recovery vs. No. 13 Wake Forest … made three tackles at South Carolina … added three tackles in season finale vs. Iowa State.

2020: Credited with 17 tackles (5.0 for loss), 2.0 sacks and a pass breakup in 196 snaps over seven games (all starts) while battling injury for much of the season … recorded two tackles at Wake Forest … unavailable vs. The Citadel … held out as a precaution vs. Virginia … returned to action vs. No. 7 Miami and added two tackles … made two tackles (both for loss) including a sack at Georgia Tech, sharing team defensive player of the game honors … returned to action vs. Pitt after missing three games, recording a sack among his two tackles and adding a pass breakup … added two tackles at Virginia Tech … notched four tackles (two for loss) in ACC Championship Game vs. No. 2 Notre Dame … contributed three tackles vs. No. 3 Ohio State in Sugar Bowl.

2019: Second-team All-ACC selection … credited with 51 tackles (9.0 for loss), 5.5 sacks, two pass breakups and a fumble recovery in 539 snaps over 15 games (13 starts) … his 13 starts were the most by a true freshman defensive lineman in school history … led all true freshmen interior linemen in the country in sacks … became the first true freshman defensive tackle to start a season opener for Clemson since Jeff Mills in 1974 … posted five tackles including a half-sack in the opener vs. Georgia Tech, sharing team defensive player of the week honors … contributed two tackles vs. No. 12 Texas A&M … posted three tackles including the first full sack of his career at Syracuse … added three tackles vs. Charlotte … recorded two tackles including a sack at North Carolina … added two tackles (1.5 for loss) and a half-sack vs. Florida State … posted seven tackles (0.5 for loss) at Louisville … made four tackles (one for loss) vs. Boston College … registered three tackles vs. Wofford … recorded a tackle, a pass breakup and a fumble recovery at NC State, sharing team defensive player of the game honors … credited with four tackles and a pass breakup vs. Wake Forest … contributed a tackle at South Carolina … registered five tackles, including 1.5 sacks, vs. No. 22 Virginia in the ACC Championship Game … added four tackles (one for loss) vs. No. 2 Ohio State in the Fiesta Bowl … recorded a sack among his three tackles vs. No. 1 LSU.