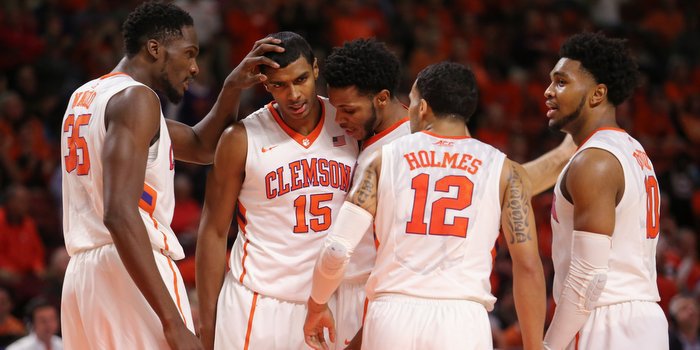 North Carolina fell to 14th in the AP Poll and 16th in the USA Today Poll, while Clemson sits just outside the Top 25 in both polls. The Tigers received 23 points in the AP and just four in the coaches poll.

Marcquise Reed scored 21 points and Clemson ended the game on a 15-0 run, erasing a 10-point deficit in the final 5 minutes to beat the Demon Deacons. Justin Jackson finished with 16 points and Nate Britt scored 13 for the Tar Heels, who committed a season-high 20 turnovers in the loss to the Yellow Jackets. North Carolina never led after Tech hit two free throws with 11:59 remaining.

Brownell says he’s looking forward to the matchup, but won’t put too much emphasis on the fact that it’s North Carolina.

“It’s just another game. It’s a game against one of the name brands in college basketball,” he said. “But it’s just one with 16 games after that. There are just so many games and we have to be ready to play and get your best team out there and get your guys ready to go. We look forward to being back in Littlejohn and I hope we have a great crowd. I hope we keep the momentum we’ve built over the last month or so. But I am not going to make more of it than it is.”

Brownell said Jackson, who stands 6-8, is tough to defend.

“He not only has length but he’s smart. He knows what to do with the ball,” Brownell said. “He has a good jumper and he also has a floater that is dangerous. He can drive the lane and create points and he can also step out and hit the jumper. Both guards (Joel Berry) are hard to defend.”

He then said there isn’t a lot the Tigers can take away from the Tech win over North Carolina, and that Clemson has to just worry about being ready to play.

“Not a lot. I think Georgia Tech played a great game and things like that happen,” Brownell said. “I am not worried about what other teams do or how they react or is UNC mad. None of that matters. What matters to us is that we are getting a good ACC team in here and they will be ready to compete and we need to be ready to compete. That needs to be our approach and what we need to worry about.”

Elijah Thomas said the Heels will present a challenge, but the Tigers have to be able to win at home.

“We remember last year, and we remember all of the teams we needed to win and we didn’t win them,” Thomas said. “Nobody likes losing. We are going to give our all in every game and we don’t want to get to the end of the season and look back and say we could have won this game or that game. North Carolina is very good, one of the top teams in the country, and they have a lot of great players, But we will be ready to play and we have to protect our home turf.”