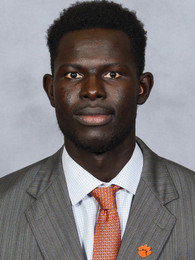 Center
B I O
First player from the country of Senegal to play for the Tigers ... signed in the spring of 2013 after an intense recruiting battle, he chose Clemson over offers from Cincinnati and Memphis ... appeared in 127 career games, scoring 474 points and grabbing 596 rebounds in 1,854 minutes ... nearly half of his rebounds (264) came on the offensive glass ... earned team's Tom Lynch Most Improved award after the 2015-16 season ... improved his numbers as a senior, averaging career bests in points per game, rebounds per game, blocks and steals ... played in the United States his final two seasons of high school, at a private school in Fayetteville, N.C. ... also played AAU basketball for the Upward Stars ... recruited to Clemson by former assistant coach Earl Grant ... majoring in economics ... visited four European countries over the summer of 2015 as part of the Global Sports Academy Tour.

2016-17
Appeared in 32 games, with 24 starting assignments ... averaged 23.5 minutes per contest ... averaged 6.5 points and 7.7 rebounds per game ... leading rebounder for the Tigers for the first time in his career ... grabbed 116 offensive rebounds, ninth-most in a single season in Clemson history, and most by any Tiger since Harold Jamison's senior season of 1998-99 ... led the nation in offensive rebound percentage, grabbing over 17 percent of available missed shots ... ranked 12th among all NCAA players and third in the ACC with 3.6 offensive rebounds per game ... shot 53 percent from the floor and a career-best 68 percent at the free throw line ... posted career highs for assists (23), blocks (27) and steals (23) ... scored double figures in eight games ... had 10 or more rebounds in nine games, leading all Tigers ... produced three double-doubles, second-most on the team ... led or tied for the team lead in rebounding in 19 games.

Appeared in all 31 games, with five starts ... averaged 15.2 minutes per game, his most playing time as a Tiger ... led the Tigers with a 62 percent field goal accuracy ... improved free throw shooter was 63.5 percent for the season at the charity stripe ... averaged 5.3 points per game, sixth-best on the team ... third on the team with 5.2 rebounds per game, but he was first on a per-minute ratio by far ... blocked 20 shots and recorded 19 steals, both season highs ... second on the Tiger team with 60 offensive rebounds ... scored double figures in five games and played double-figure minutes in all but two outings.

Top effort of the season was a 14-point, nine-rebound performance in home ACC opener against Florida State on January 2 ... did not miss a field goal and was 8-10 at the free throw line in the win ... scored 13 points to end the season against Georgia Tech, where he was 5-9 from the field with seven rebounds and three blocks as well ... notched 12 points and 13 rebounds in November 15 win over Presbyterian ... posted nine points and 12 rebounds in upset win over No. 16 Louisville on January 10, he was 7-11 from the free throw line in that contest ... added two blocks and a steal in an active 21 minutes ... posted 12 at NC State on 6-8 field goals, while chipping in eight boards ... scored eight points and added five rebounds and two steals at Florida State ... scored eight at Georgia Tech on perfect 4-4 shooting ... notched 13 points and 11 rebounds against Texas Southern in the third game of the season.

2013-14
Appeared in 34 games, with one starting assignment ... played a total of 304 minutes, an average of 8.9 per contest ... averaged 1.1 points and 2.7 rebounds per game ... possessed the top per-minute rebounding ratio on the team ... fourth on the team with 40 offensive rebounds, despite playing the eighth-highest minute total on the roster ... fourth on the team with nine blocks ... played double figure minutes in 12 games ... posted at least four rebounds in 10 games, including back to back contests in December.

Best Games, 2013-14
Made 4-4 field goals and scored season-high eight points in 15 minutes on Dec. 14 against Furman ... added 10 rebounds, including season-high seven offensive boards, in the win over the Paladins ... did not score, but grabbed 10 rebounds in 24 effective minutes off the bench at Arkansas ... six rebounds were on the offensive glass ... posted two points, four rebounds and a block versus Davidson ... scored four points in eight minutes at Auburn ... scored six points and added seven rebounds in 14 minutes at Pittsburgh ... pulled down six rebounds in 14 minutes at North Carolina and six in 18 minutes at Florida State in back to back ACC games ... started and played 11 minutes against NC State ... tallied four points and three rebounds against Georgia Tech in the ACC Tournament.

Before Clemson
Three-star prospect according to the national recruiting services ... ranked as the 13th-best prospect in the state of North Carolina by ESPNU ... Fayetteville Observer Cape Fear Region Player of the Year as a senior when he averaged 17 points, 12 rebounds and three blocked shots per game ... Player of the Year and Tournament MVP in the Carolina Christian Conference (CCC), he led Northwood Temple to a 28-11 overall record and CCC regular season and tournament titles ... helped team to NCISAA Final Four ... first-team all-state and a McDonald's High School All-America nominee ... selected to play in the Southeast Elite 24 All-Star Game ... also earned a varsity letter in soccer ... coached by Chris Lattimer ... born Apr. 11, 1994.