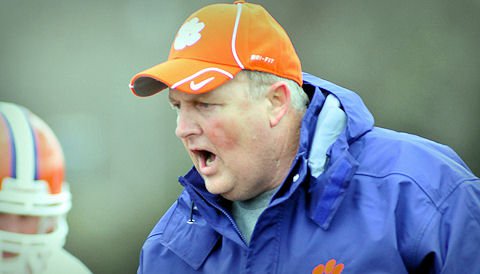 I was pleased to see Isaiah Battle

Isaiah Battle
So. Offensive Tackle
#79 6-6, 280
Brooklyn, NY
View Full Profile get his second big opportunity this past game against Georgia Tech.  Battle was thrown into action against LSU last year in the win in the Chick-fil-a Bowl but was not able to win a starting position until last week.  Apparently he played well enough to earn the start again this week versus The Citadel.  This is a big start to see if Battle is ready for a bigger role in the immediate future.

Clemson should get its 10th win of the season Saturday against The Citadel.  Some in the media also feel the win will wrap up an Orange Bowl bid while others still think the Tigers have work to do.  Also don't forget Florida State cannot lose to Idaho, Florida or in the ACC title game if the Tigers want to play in South Florida.  If the Noles don't play in the BCS title game then Clemson would need to beat South Carolina to be considered for an at-large bid to the Sugar Bowl or Fiesta Bowl.

One of my favorite charities is the Wounded Warrior Project.  A few months ago Clemson assistant golf coach Jordan Byrd reached out to me and presented a terrific opportunity for WCCP-FM to help this charity.  Clemson golfer Cody Proveaux played last season in The Patriot Golf Tournament that benefits the Wounded Warrior Project.  Byrd has helped us set up a great auction where the winning bid gets Proveaux's golf bag from the event, a dozen Clemson golf balls and a purple Clemson golf shirt like the one the team wears.  You can go to WCCP's Facebook page to bid.  The auction will end Friday at 8:30 a.m. and we will announce the winner on my radio show Friday.  Thanks to those that go to the Facebook page and express interest in helping out a terrific cause.

Hopefully Clemson play-by-play announcer Pete Yannity will change his catch phrase to "And there's purple in the end zone" often Saturday.  It was brought to my attention this morning by my producer, Thomas Black, that the perfect day Saturday would include Purple Heart recipient Daniel Rodriguez

Daniel Rodriguez
RS So. Wide Receiver
#83 5-8, 175
Stafford, VA
View Full Profile scoring his first college touchdown.  I can't imagine anything more appropriate and have my fingers crossed for this to happen Saturday.

I try not to post too much straight from SID releases on the blog, but I was sent this yesterday and thought it would be helpful to many.  Below is a list of the activities going on Saturday surrounding Military Appreciation Day and information for veterans and current military personnel on how they can participate:

Clemson University celebrates Military Appreciation Day on Saturday as the Clemson football team plays host to The Citadel at noon, and the university has a full slate of activities planned throughout the day in conjunction with the 20th anniversary of the event. The game features the school’s first ever Purple Out as fans are encouraged to wear purple in support of the military.

Bowman Field will open officially at 8 a.m., and will have the largest display of military vehicles in the 20-year history of Military Appreciation Day. The displays will include current military vehicles, vintage vehicles and several interactive displays.

The Pershing Rifles (PR) will have a 24-hour guard at the Scroll of Honor beginning at 12 noon Friday until 12 noon Saturday. There will also be a special flag change out ceremony at 9 a.m. at the Scroll of Honor by the PR. There will be a tailgate with light refreshments for former Clemson graduates who are in or were in the military on the Fike deck beginning at 9:30. Our distinguished visitors are: LTG John Mulholland, USA, Furman grad and now Deputy Commander of US Special Operations Command, MajGen Jay Raymond, USAF, Clemson grad and now Director of Strategic Plans and Policy at US Strategic Command, and BG Eddie Jackson, Clemson grad and now Commander South Atlantic Division, US Corps of Engineers.

Following a half-hour Tiger Band performance in the amphitheater beginning at 10:30 a.m., the military parade rolls from the Holmes and McCabe dormitories. All veterans and current military personnel from both Clemson and The Citadel are invited to participate in the parade.

Celebrations continue at the game, with a scheduled flyover of six post-World War II vintage Warbirds at the conclusion of the National Anthem. Throughout the game, there will be numerous recognitions and ceremonies to honor Military Dignitaries, Wounded Warriors, Honor Flight and many more.

Halftime plans include the Summerall Guard from The Citadel, and a special ceremony as Clemson pays tribute to fallen soldiers from the state of South Carolina and recognizes their family members. The Clemson marching band will also pay tribute to all five branches of the military during its halftime show.

All veterans and current military personnel are invited to stand in the West end zone during the halftime ceremony. To participate, go to Portal X in the WestZone with five minutes remaining in the second quarter.