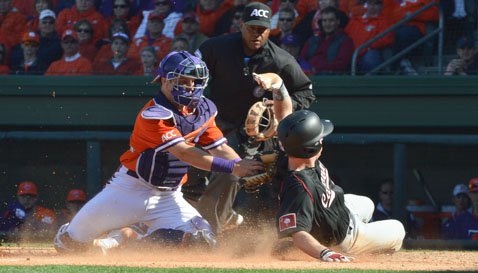 I have never pulled for Clemson to lose a sporting event. I know people that called themselves Clemson fans that rooted against the Tigers during the end of the Ken Hatfiield era to make sure a coaching change was made, but I could never make myself do that.

So, I was happy yesterday when the Tigers received a bid for the NCAA baseball tournament, and I hope Clemson goes on to win the national championship.

However, I have mixed emotions about yesterday. I never thought I would see the day when I was happy Clemson was the last team selected into the tournament. Being on the bubble is reserved for Clemson basketball, not Clemson baseball.

Matthew Crownover
Jr. LH Pitcher
#44 6-0, 210
Ringgold, GA
View Full Profile pitch. He has had a great career and I realize the next time he goes out there may be his last in a Clemson uniform. I love watching Steven Duggar

Steven Duggar
Jr. Outfielder
#9 6-2, 195
Moore, SC
View Full Profile gun down base runners from right field. He has perhaps the best arm I have seen at Clemson. I have really enjoyed Chris Okey's clutch hits as of late.

But I also got a feeling I had at the end of this basketball season. As much as I love Clemson basketball, I was ready for this past season to be over. I had grown tired of watching the same guys make the same mistakes over and over. For one of the few times in my life, I feel this way about this baseball season as well.

This team has had some thrilling wins. I loved taking two of three from South Carolina, sweeping Florida State in Tallahassee and splitting on the year with Louisville. However, the low points have been very low. The mid-week losses mounted. The unforced errors have taken a toll.

So, yes, I am happy for the players that they will get another chance to represent Clemson, and I will be on the edge of my seat pulling for them on every pitch this weekend. However, it's also hard to get excited about being the last team to get in the tournament and being a three-seed for the second straight season.