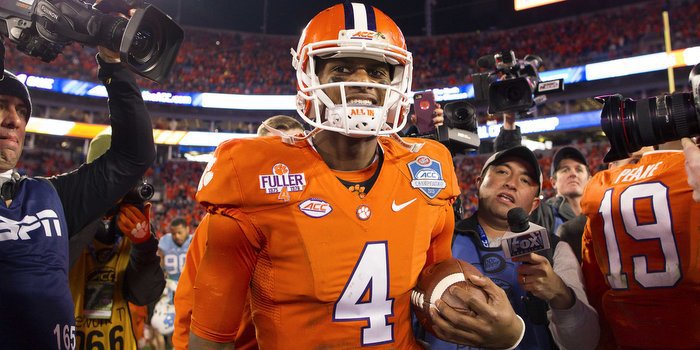 There is so much to digest from Saturday night and the fallout from the Tigers winning their 15th ACC title. Actually there is so much to review from this entire season, where this program came from and where it is now.

I have been watching Clemson football since 1974 and I have never seen the things we are currently enjoying. From Saturday's game to Sunday's college football playoff announcement to a pizza party to tonight's Heisman finalist announcement, is has been a crazy 48 hours.

The Tigers won their 16th straight game, establishing a school record for consecutive victories. They beat four teams that have ten wins this season and three that are in the top ten in the country. Clemson won its 13th game of the season for the first time in school history.

This is the first time Clemson has had the ACC Coach of the Year, the ACC Player of the Year and won the ACC Championship all in the same year since 1981.

Yes, it is a great time to be a Tiger!

Saturday's game will be remembered for two dominating performances on offense. Deshaun Watson was 26 of 42 for 289 yards and three touchdowns through the air. He had 24 carries for 131 yards and two touchdowns on the ground. Watson set ACC Championship Game records with 420 yards of total offense and five total touchdowns.

Defensively, the Tigers were hurt by short fields, but Clemson held UNC to 126 yards rushing. All-ACC running back Elijah Hood was held to 14 carries for 65 yards. Marquis Williams was just 11 of 33 through through the air.

There were few negatives from the game, but one was Clemson's disastrous special teams. The Tigers botched a punt where Andy Teasdall made a bad decision and gave the Heels great field position. The punt block/return team yielded one return for minus yard. The longest kickoff return was 20 yards. The Tigers had 11 penalties for 80 yards. Field position was against the Tigers most of the night as well.

But the offense and defense overcame those factors and more. Perhaps the biggest difference in these two teams was along the lines of scrimmage. I thought the Tigers won the battle of the trenches in the second half.

Saturday's win continues a magical season and sets up potentially more magic in the future. Tonight at 6:00 PM we will hopefully find out Watson will be in New York for this weekend's Heisman presentation.

On New Year's Eve Clemson will face Oklahoma at 4:00 PM in the Orange Bowl in the national semi-finals. A win would mean a trip to the national title game on January 11th.

In the short-term, Clemson is in line for another extremely talented recruiting class. In the long-term, this staff has a lot to sell for future prospects.

In almost every way imaginable way, this is a great time to be Tiger! In my opinion, the best I have been around.