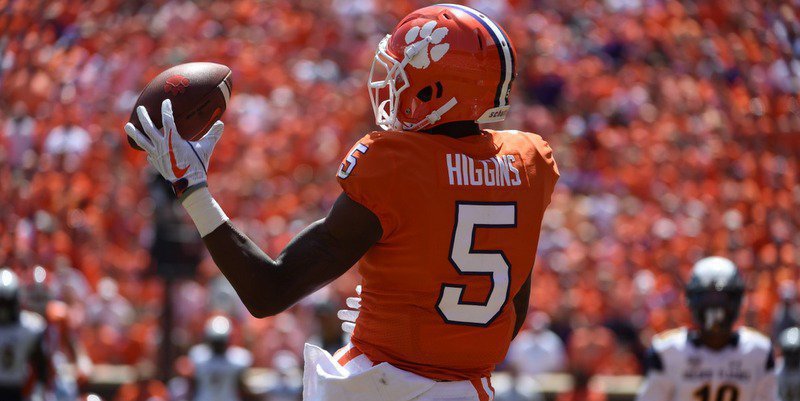 As Dabo likes to say, "at the end of the day" a win is a good thing. It is also good that A&M is the best team on the schedule and Clemson will not even come close to playing in an environment like A&M. The supposed QB controversy is a non-issue , and that is good.

Is the fact that the running game is off to a slow start a bad thing? Was the O-line unable to open holes or was passing the only option against the stacked box? When we watch games, especially those coached by Jimbo, it is obvious that tight ends and running backs can actually catch the ball and be a huge part of the offense. Clemson rarely uses backs and tight ends and maybe that affects the job the defense does against teams that use backs and tight ends. Try it, you might like the results on both sides of the ball.

In no uncertain terms, the pass defense was ugly. Ok, I have never seen a game where so many passes were caught after being tipped but again, "at the end of the day" they were caught. Football is a game of give and take and if a team cannot run against Clemson, they have to throw and Clemson was horrible against those throws. The defense will get better and will not face a team with as much talent as A&M until the playoffs if we are lucky enough to be there.

A win of any kind is a good thing.

I will take 13 more wins just like that one. It was not beautiful, but a win is a win. I walked out of several wins in recent years feeling concerned, but this staff fixes issues. This felt like the win at Auburn in 2016. With that said, there are a few issues that have shown up, but every season has its challenges. I am concerned about the running game. The offensive line has not dominated and the running back rotation doesn’t make sense to me. Etienne needs more touches.

The quarterbacks had some great throws and some mistakes. Bryant had two amazing throws in the second half, but his first-half fumble was a huge momentum swing. Lawrence had a couple of great throws, but A&M was able to pressure him.

I thought the defense played well in the first half. I thought A&M got away with a bunch of holds in their protection. Give Mond, Williams and their wideouts a ton of credit. They made some amazing plays. Several times Mond made something from nothing and threw some miraculous completions. With that said, too many Aggies ran wide open down the field. I thought A&M’s screen game was very good as well.

I am encouraged the way the Tigers went into a hostile environment in front of 104,000 and came away with the victory. Clemson overcame two 70-yard punts, a great effort by an athletic quarterback and some amazing catches in a tough environment. I will take it.

Let’s see how the Aggies’ season turns out. This might be a great win in November. However, Clemson has a bunch of issues to fix. My guess is the staff will do a great job in addressing those needs.

Mickey, great start and only concerned about BC going forward. So far, I see the offense is putting more emphasis on the pass and less on the run. Maybe they are trying to figure out the QB situation. Would like to get your thoughts. On the defensive side, playing well and not getting holding calls. Hard to believe there wasn’t a single holding call all night where there were several. I would also like to hear your thoughts on why we cannot seem to cover tight ends.

One of the major focal points of the offseason was getting the vertical passing game back in the offense. They have accomplished that so far through two games. However, the running game has not been as consistent. Moving forward they will need to get the running game more efficient.

On defense, there were several issues with the coverage. Tight ends are dangerous because they are tough matchup with slower linebackers or smaller safeties. Any team that has a tight end as a weapon has a big advantage. I think the pass coverage will be the biggest defensive concern moving forward. I will point out that some questioned why they will sign so many safeties in this upcoming class, but I think Saturday night gave us a clue.