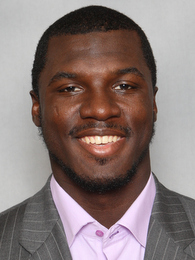 Outside Linebacker
B I O
Talented linebacker who was hampered by injury during most of his career, but emerged as one of the team’s best defensive players in 2014 ... valuable member of the special teams ... had 141 tackles, 13.5 tackles for loss, 4.5 sacks, 14 quarterback pressures, three pass breakups, one caused fumble and one recovered fumble in 771 snaps over 43 games (12 starts) in his career.