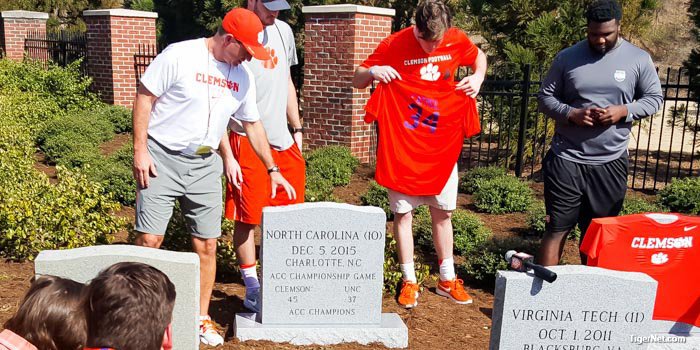 CLEMSON – Two new tombstones were unveiled in front of the indoor practice facility Wednesday afternoon, and Dabo Swinney likes to walk by the tombstones and think about the memories.

Clemson makes tombstones for road wins over Top 20 teams, and the Tigers unveiled the two newest Wednesday. Clemson defeated No. 10 North Carolina in Charlotte in the ACC Championship Game and defeated No. 4 Oklahoma in the Orange Bowl.

“That is definitely a good thing. It's really just a tradition that's been neat to participate in,” Swinney said. “Obviously, Clemson has had a lot of success over the years and since my time, it's been fun to be a part of a lot of those. It's neat to walk by and remember those moments throughout the year. I appreciate our guys coming back.”

Wednesday was practice number six in the spring.

“Everybody is excited about pro day tomorrow. I know our guys will be amped up for that. Today is day six for us” Swinney said. “I was just telling the team that it seems like the season just finished, and now we're already day six of spring ball. It goes really, really fast. I really like what we've been able to get done these first five days. It's been very physical. We've had a pretty good amount of installation, but we've tried to just focus on making sure these guys are learning how to do what we're asking them to do in all three phases. Today is another big day. It will be very competitive. That's another thing that I like how we practice - if you don't show up you get exposed because it's very competitive every single day with how we practice.”

The good feelings were tempered with the news that corner Adrian Baker has been lost with a torn ACL suffered last Saturday.

“We did lose Adrian Baker. He tore is ACL. Like a lot of ACL injuries, it was non-contact,” Swinney said. “He just planted doing one-on-ones. We already started that process of getting him back and we're all hopeful to get him back in September. That's our goal. His attitude is good, but you hate when young men have to deal with that type of adversity. We've got a long line of guys that we can point to - starting with Deshaun Watson, Charone Peake, Tony Steward - who have dealt with the same thing. Hopefully, Adrian will attack his rehab like those guys and have the same type of success.

“Outside of that, it's been a good spring. We've had a couple of guys get a little dinged up. Kaleb Chalmers injured his shoulder but he should be back soon. Hopefully, we'll get through today and not have any other issues. We expect everybody back once we get back from spring break. Wiggins won't do all of the contact stuff, but he will be mixed back in all of the individual stuff when we get back from spring break, as well.”

“We had a half scrimmage on Monday. It was really the first time we let them play a little bit. It was controlled. We created situations. It was good to see the guys go out and play. It's good to see who's getting it and who's still not quite there. The break is coming at a good time after six days. We'll have meetings tomorrow, and then we'll be off next week and hopefully, they'll continue to study their notes and installation and come back and be ready for a strong three-week finish.”

“Right now, Mark Fields is our first guys. He's having an excellent spring. He's a different guy right now. It's amazing what happens when some guys move on and all of a sudden you feel that sense of urgency of, 'hey this is my opportunity.' Plus, he just knows more. He's been here a season. Mark Fields has a chance to be really, really special at that position. This kid has got everything that you need to be a great corner. So far, he's putting the work in and if he'll continue to do that then the rest will take care of itself. That's where it starts. We're very confident in Ryan Carter. We're trying to teach him safety to create a little more versatility within that back end with our veteran guys. He can slide up there and win for us at corner without a doubt. Marcus Edmond is another guy that showed a lot of improvement to us as coaches the last part of seasons, especially at bowl practice. He's getting that opportunity to continue to compete. Then, Kaleb Chalmers was off to a great start and hurt his shoulder but he should be back. He'll be back in green today and should be full go when we get back after the break. Amir Trapp was another guys that was showing progress and he broke a bone in his hand. He'll be back going. He'll be clubbed up. We've got several guys that are showing that they deserve opportunity.”

Meaning of the tombstones

“If they work hard, the can beat anybody anywhere anytime. There's a lot of those games that we were probably not picked to win, but we did win. It's just a reminder to them of some great moments we've head, but as you walk by it, it all starts right out here on this practice field. You've got to put the work in.”

His advice to the team heading into spring break

“Go have a good time. That's great for them to get some time off. They're all doing different things and I think that's great for them to have an opportunity to do that. Just remember who you are and make good decisions. Do what's right. There's consequences for your actions. You represent Clemson at all times. You don't ever turn that off. None of us do, so take pride in that and understand that it's a privilege to be a part of this university and a part of this team. With success comes scrutiny, so make sure that you are careful with where you are, who you're with and do what's. Just the reminder. Go have a good time.