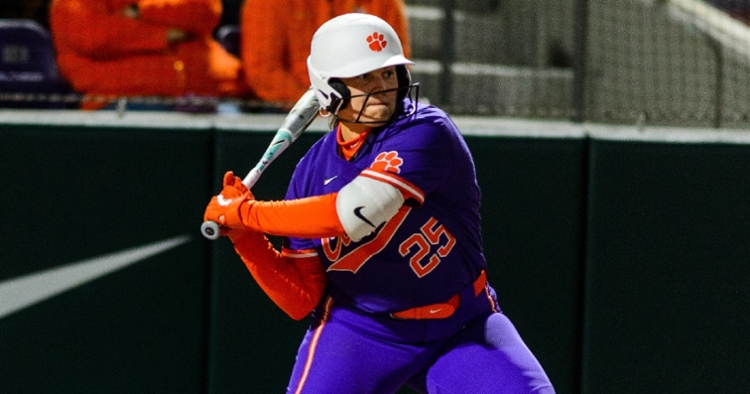 Marissa Guimbarda's homer was the difference Saturday to extend the winning streak. (photo by David Grooms).

CLEMSON, S.C. – For the third straight game, Clemson designated player Marissa Guimbarda homered to the Clemson Softball Stadium center-field wall to put the Tigers on the board. After her three-run shot in the top of the first earlier in the day in Clemson’s 21-2 rout over Maryland, the junior registered the game-winning hit - and her fourth home run of the season - against Michigan State on a two-run homer to dead center in the bottom of the sixth as the Tigers came back to win, 2-1.

With the victory, Clemson earned its fourth straight win and improved to 6-4 on the season. Michigan State fell to 1-6 overall.

Freshman right-handed pitcher Logan Caymol earned her fourth victory in the circle and tossed her third complete game of the season. Caymol allowed just four hits and tallied five strikeouts on the night.

The Spartans took a 1-0 lead on a triple that kicked off of the center-field wall, which scored MSU’s Erica Holt, who was on first.

Clemson had Cammy Pereira and Carlee Shannon in scoring position in the third and fourth innings, respectively. After both players stole second, the Tigers could not capitalize leaving both Pereira and Shannon stranded.

Up next, Clemson takes on Michigan State in a rematch on Sunday. First pitch is scheduled for 12:30 p.m., but is subject to change pending the time of the conclusion of Pitt and Maryland, which is slated for 10 a.m. at Clemson Softball Stadium. Sunday’s contest between the Tigers and MSU will stream on ACCNX.