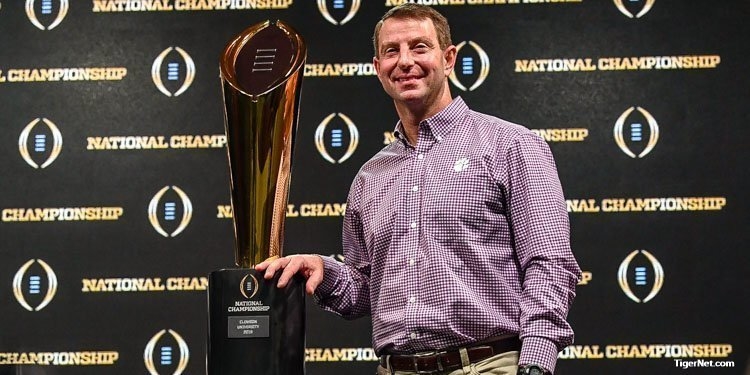 "Clearly, Saban is still the clear-cut No. 1. He's won more national titles than anyone by a long shot," Kercheval writes, "routinely recruits better than anyone, puts more players in the NFL than anyone and has an impressive coaching tree. However, Swinney has closed the gap as much as any coach since Saban's reign with the Crimson Tide began.

"He's bested Saban twice in the CFP title game (including January's stunning 44-16 rout of the Tide), recruits and develops near Saban's level and has a tremendous staff."

Swinney is 116-30 all-time as a head coach, but in College Football Playoff runs over the last four seasons, Clemson has gone 55-4 with three Playoff bowl wins and two national titles.

In the next tier is two ACC coaches in Virginia Tech's Justin Fuente and Virginia's Bronco Mendenhall. Duke's David Cutcliffe and Syracuse's Dino Babers are in a tier for "program builders." South Carolina's Will Muschamp ranks fifth out of 10 coaches in the 'Jury's still out' group, which is led by Auburn's Gus Malzahn and Florida State's Willie Taggart.