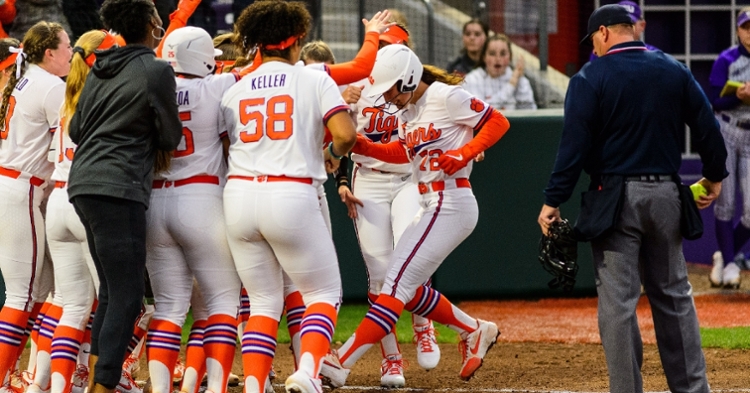 CLEMSON, S.C. – Coming off its inaugural home opener, the Clemson Softball team (3-4) is set to host Maryland (1-4) and Michigan State (0-4) for the Big Ten/ACC Challenge this weekend (Feb. 14-16). The four-team tournament will also feature Pitt (2-3). Clemson was announced as one of six host sites for this year’s Big Ten/ACC Challenge on July 9, 2019.

Fans wishing to attend this weekend’s Big Ten/ACC Challenge should plan accordingly as Clemson is scheduled to host 17 home events across six different venues Feb. 14-16. Because of recent inclement weather and timing, fans attending events are asked to plan ahead and arrive early for parking.

The Tigers are coming off their inaugural home opener, a doubleheader against Western Carolina on Wednesday (Feb. 12) which Clemson split, 1-1. Freshman right-handed pitcher Logan Caymol led the Tigers to victory in Wednesday’s nightcap after tossing a no-hitter in Clemson’s 8-0 shutout over the Catamounts.

· Tickets for the Big Ten/ACC Challenge are on sale on a per-day basis. For tickets, visit the ClemsonTigers.com softball ticket page.

· Three out of the four Clemson games this weekend are set to air on ACC Network Extra. Both contests against the Terrapins and Sunday’s tournament finale against the Spartans are expected to stream on ACCNX.

· Freshman right-handed pitcher Logan Caymol tossed a complete-game no-hitter in game No. 2 of the Tigers’ inaugural home opener (Feb. 12), a doubleheader against Western Carolina … Caymol posted 11 strikeouts and improved to 2-1 in the circle as Clemson defeated Western Carolina 8-0 in five innings.

· Freshman catcher JoJo Hyatt recorded the program’s first-ever triple in the bottom of the fourth in the Tigers’ second game against Western Carolina (Feb. 12).

· Senior infielder MK Bonamy secured the first-ever hit at Clemson Softball Stadium against Western Carolina (Feb. 12) on a double to left-center field with an 0-2 count. Bonamy also hit her first career grand slam in the bottom of the seventh against St. John’s (Feb. 9), which scored the last four runs of the game.

· Junior infielder Cammy Pereira went 3-for-3 at the plate in Clemson’s second game against the Catamounts (Feb. 12).

· Freshman outfielder Alia Logoleo made her Clemson debut after pinch hitting for the Tigers in the bottom of the fourth in Clemson’s 8-0 win over Western Carolina (Feb. 12) … Logoleo walked and eventually scored on Hyatt’s triple in the fourth.

· Freshman catcher/utility Abi Stuart is currently leading the team with a .500 batting average in eight at-bats (as of Feb. 13) … Stuart came off the bench in the sixth inning against St. John’s (Feb. 9) to hit her first career home run in her first at bat of the day on the first pitch she faced ... Stuart’s home run kickstarted 15 unanswered runs for the Tigers … She also doubled and scored later in the seventh.

· Freshman right-handed pitcher/outfielder Valerie Cagle has homered in her first at-bat in Clemson’s last two consecutive wins ... Against St. John’s (Feb. 9), Cagle started the game in the circle, left the game while the Tigers were trailing 6-4 in the fourth, and re-entered at pitcher in the sixth inning before earning her first career win.

· In Clemson’s rematch against St. John’s (Feb. 9), the Tigers scored 19 runs, including 15 unanswered in sixth and seventh innings, in their final game of the UCF tournament. Clemson trailed by as many as five runs (9-4) in the fifth, but came back to defeat St. John's 19-9 after an explosion of offense in the final two innings of the contest.

· Junior designated player Marissa Guimbarda registered the game-winning hit for the Tigers against the Red Storm (Feb. 9) with a single up the middle to Bonamy.