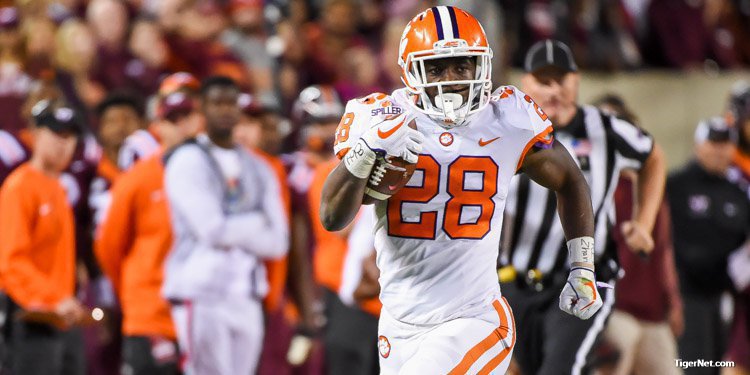 The Tigers made history Saturday night when the Tigers became the first team in college football history to beat three top 15 teams before October 1.

Heading into the game I thought Clemson was better at every position except placekicker, but the concern was how would it handle the atmosphere. Once again we saw this team play well in a hostile environment. Some called this the biggest game in Lane Stadium in 10 years, but Clemson quickly showed it was the better team.

In the middle of last week, a good friend told me this was the game for us to see if Clemson is on Alabama’s level. His point was the Tide gets everyone's best shot and still wins on the road. Perhaps my biggest take from this evening is that this program is built for games like this.

The feats continue to impress, and the numbers continue to add up. The Tigers extended their school record streak of eight consecutive wins against a top 25 team. It is the longest active streak in the FBS. Clemson is now 10-1 in matchups of top 15 teams since 2015.

The Tigers won their 12th consecutive game on the opponent’s home field, the longest streak in Clemson history and tied for the second-longest active streak in the nation. Oklahoma has 13 and Alabama also has 12.

Want more? Clemson is 13-0 at night over the last two years, with seven of the wins coming over top 20 teams. Only three of the 13 wins have been at home.

Needless to say, this is the best the program has ever been and I believe it when the staff says the best is yet to come.

This was a defensive masterpiece. Brent Venables put together another tremendous game plan, and the defense executed it very well. The Tigers showed the Hokies so many different looks including dropping defensive ends into coverage often. Clemson pursued the football very well and tackled as good as I have seen this season. This defense played well at all three levels.

If there was a star on defense, it was Austin Bryant who played perhaps his finest game including a beautiful one-handed interception. Another was Dorian O’Daniel who had a pick-six for the final nail in Tech’s coffin.

Offensively the game plan was aggressive early, but conservative after the Tigers secured a big lead. Kelly Bryant was the difference in the game according to Hokie defensive coordinator Bud Foster. Bryant hurt Virginia Tech with his arm and legs.

Bryant set the tone with a great throw to Ray Ray McCloud on the opening drive that led to a field goal. His great read was the key to the 60-yard touchdown pass to Tavien Feaster that gave the Tigers a 10-0.

Special teams were a mixed bag, but a fake field goal attempt was sniffed out by the Tigers who grabbed momentum in the defining moment of the special team's story.