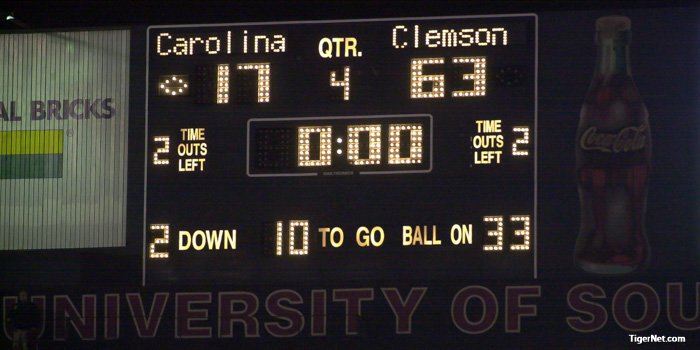 My first Carolina-Clemson game was 1974. My dad took us to see Clemson beat South Carolina, but I don't remember much about that one mainly because I was only six at the time. I do remember Ken Calicut having a huge rushing day because we were both from Chester, SC. I missed the 1975 game, but have seen every game in the rivalry since 1976.

I grew up in this rivalry. I love this rivalry. Mainly because in my lifetime my side has had the upper hand. Clemson is 27-13-1 in the games I have seen.

I have always felt that losing hurts more than winning feels good in the rivalry. Perhaps the best way to explain it is that beating them feels almost like relief instead of ecstasy.

I have memories from almost every game. The loss in 1979 was my first loss and watching that punt soar through the air really hurt. I was shocked in 1984, especially after we got the big lead. I hurt for my friend Rodney Williams on a cold night in 1987. Those strange games in 1992, 94 and 96 we felt bad, especially the Tanneyhill losses, but those five straight losses were something I thought I would never see and hope to never see again.

The wins that stick out were games like the 1977 comeback win, which might be the best game in the rivalry's history. Jerry Butler made one of the greatest catches in Clemson history with his 20-yard touchdown with less than a minute to play to give the Tigers a thrilling 31-27 win.

I was there in 1980 when Willie Underwood intercepted two passes including one he returned for a touchdown as Clemson shocked the 14th-ranked Gamecocks.

I don't think I will ever see as many oranges than what we saw rolling across the astroturf field in Columbia when Rod McSwain blocked the punt in 1981.

I loved Rodney's revenge in 1988 when the Tigers sent him out a winner with the 29-10 victory.

Perhaps the most physically dominant I have seen either team was Clemson's 45-0 win in 1989 in Columbia.

I was there when Emory Smith carried Gamecock defenders in the 1995 win.

This series has seen orange britches and "No Cigar Today" t-shirts. It has given us fights and one liners. What other rivalry could feature oranges and Zero candy bars thrown on the field?

I feel like I have seen almost everything in this rivalry, but the last two years have given us a few things I thought I would have never seen. Last year Clemson was a 20-point favorite. This year its up to about 23-24 points. I would have never believed one team would be favored by that margin.

Last year about 35,000-40,000 Tiger fans took over Williams-Brice Stadium. This year I expect fewer Gamecock fans on the stands than we have seen in many years and maybe ever.

I love this rivalry, but boy I really love how it has been the last two years. Here's to adding another happy chapter Saturday night.