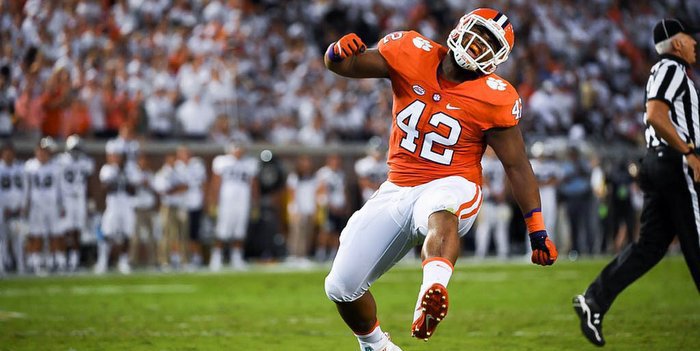 Wilkins prepares for each opponent the same

CLEMSON -- As a junior, Christian Wilkins has played in a lot of games – and many big ones – with the Clemson football program.

But the standout defensive tackle said this week’s game against Auburn isn’t any different than any of the other games Clemson will play this season. And that includes last week’s season opener against Kent State.

“Something I’ve learned since I’ve been here is the bigger the game is, the smaller you kind of have to make it because there’s going to be people all week telling you that this is a big game, that you really gotta get ready for them,” Wilkins said. “People are not going to want to talk to you during the week because you’ve got to get focused. But it’s the same thing with any other opponent. Every game’s the game. Every game’s just as important.

What does matter is preparing for a talented Auburn offense.

Last week against Georgia Southern, Jarrett Stidham made his Auburn debut at quarterback and completed 14-of-24 passes for 185 yards and two touchdowns.

Kam Martin and Kerryon Johnson both rushed for 136 yards and a touchdown as Auburn finished with 351 yards rushing and 535 yards of offense.

Wilkins got a close view of Stidham in high school and was impressed then. The former Baylor quarterback was named Auburn’s starter during preseason practice.

“From what I’ve seen, they’re who they are,” Wilkins said of any Auburn offensive changes from last year’s Clemson 19-13 win. “Definitely, he’s a really good, talented player. Got to see him up close and personal a little bit in high school at the Under Armour game. I thought he was a really good, talented player then, and he has only improved since then. But he’s a good player, and hopefully, we can get after him a little bit and just make plays and play good defense.”

Clemson’s defense did just that last week in a 56-3 win over an overmatched Kent State team. The Golden Flashes managed just 120 yards of offense, including 1-yard passing.

“It was definitely a good start, a good way to start off the season, set the tone for the year,” Wilkins said. “It was great to see that a lot of guys got the opportunity to play, get in the game, get some experience for guys who haven’t had a great opportunity, a great chance to play so much. So it was just a good effort overall, a good team win. I felt like we just clicked on all three phases and really made it easier on ourselves. Give a shout-out to Kent. They came in here and competed, but we were just able to come out on top.”