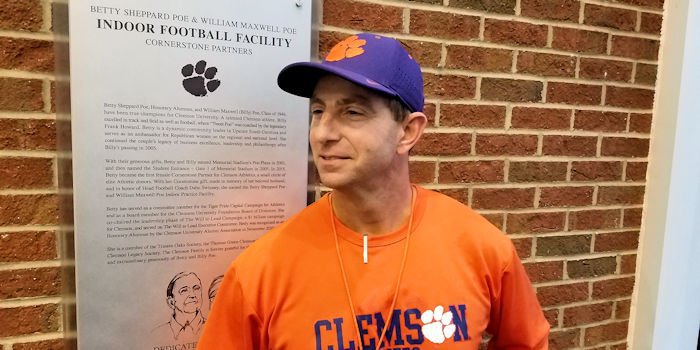 Swinney stands in front of the new plaque Wednesday

CLEMSON – The indoor practice facility got a new name Thursday night, and Clemson’s football team is looking forward to a new game Saturday night in Winston-Salem.

They will even run Deshaun Watson if they have to in order to win.

The football team held a ceremony Wednesday to dedicate the facility as the Betty Sheppard Poe and William Maxwell Poe Indoor Football Facility, and Swinney said gifts from major donors are a major part of keeping a program like Clemson’s running.

“In anything. Whether you're a university, a business, a church, anything, it takes great people,” Swinney said. “And Betty Poe, they just don't get any better. She's been incredibly generous to Clemson University. Her whole family. Obviously, her husband played here for Coach Howard. It's pretty neat to be a part of this and the indoor facility to be named in their honor. It's a special day.”

The Tigers are getting healthy at the right time, and left tackle Mitch Hyatt should be ready to play.

“Everybody is good. Mitch is good,” Swinney said. “The only one that's gonna be out is Trayvon (Mullen), and we are just going to put him on the shelf this week. He has a little inflammation in his Achilles area, and so we are just going to keep him in a boot all week and hopefully by Sunday he is a little bit better. It's been lingering around, so we'll hold him out this week and hopefully it will get better.”

Right tackle Jake Fruhmorgen was back at practice but didn’t dress out.

Swinney stands in front of the new plaque Wednesday "

“Jake was back at practice today. It was great to see him and have him around his teammates,” he said. “I think it was good for them and for him. I think that's a positive, and I think he's in good spirits, but I think it will still be on a day-by-day deal with that.”

Clemson has to beat Wake Forest if they want to win the ACC Atlantic, and Swinney said the players understand what’s on the line this week.

“It was on the line last week too. We are fortunate that we get another chance,” Swinney said. “But they've earned that because they've played well all year. But they thing they learned last week is that you have to earn it. You have to play well. We will have to play much better this weekend, on the road against a team that's much improved Defensively, they will be a big challenge for us.”

Swinney was asked if the coaches would feel comfortable running quarterback Deshaun Watson this week, and Swinney indicated he didn’t like the question.

“We've been comfortable with it all year. Why are we going to run our quarterback with eight and nine men in the box? Did you watch the game? If you have nine guys in there, do you want to run the quarterback? We threw for 580 yards,” Swinney said. “I am tired of that question. That's about the third time this week. I am not going to run my quarterback into a defense that's built to stop the run when I have Mike Williams against a defense that cannot stop the pass. He's run the ball all year, and he'll run the ball when it's called for to run the ball.”

The good news? The Tigers have had a great three days of practice.

“Great week of practice. They responded tremendously well. The leadership has been great, and practice has been good. We had a good week of practice last week, but we didn't win the game,” Swinney said. “We have to get back on track this week. The best leadership comes from within, and we have that. It's on the coaches, too, but we all have a job to do. From the time the game was over to right now they've all done a great job. We just have to play well. The best team doesn't always win; it's the team that plays the best. And the team that played the best last week was Pittsburgh. They are eager to get back to play, and we are anxious to go play well and play well.”