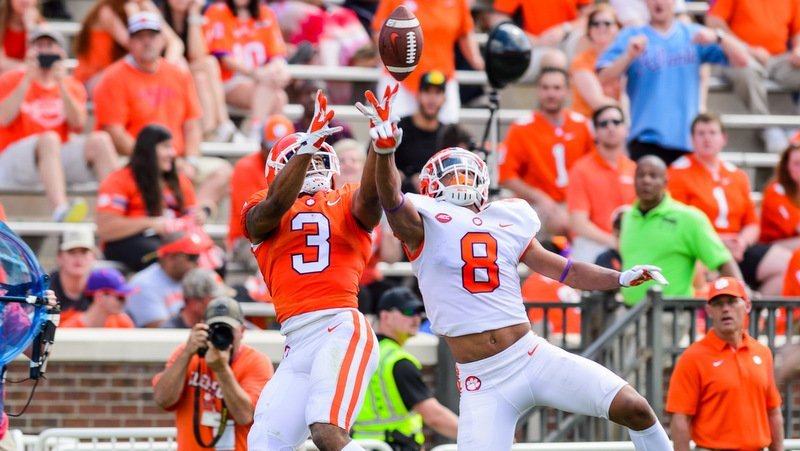 AJ Terrell breaks up a pass intended for Amari Rodgers

CLEMSON- Despite having a frustrating spring full of practices lacking the momentum shown in past years, defensive coordinator Brent Venables came out of the spring game with a smile on his face.

Venables’ defense, despite being split into two groups for the spring, showed promise on all levels.

“It was pretty good, I thought splitting the squad up today and our guys were flying around pretty good, gave up some plays in competitive situations,” Venables said. “We had good receivers, good quarterbacks. It was just another practice, plenty to learn from and build on, and you know going into the summer when you put those squads together I feel pretty good.”

Venables has added many new faces to his defensive line, including star freshman Xavier Thomas. The freshmen seemed to have impressed their coach during Saturday’s spring game.

“That’s good, those guys have all gotten better, the young guys, in particular, all spring,” Venables said. “Like Justin Foster is really starting to get comfortable, KJ (Henry) and Xavier (Thomas) as well. They really flashed all spring. Today was a day for them to get out there and turn loose, so it was good to see that.”

Though the spring game seemed to have gone well for the defensive backs, Venables isn’t entirely pleased.

“Yeah, we got some good guys out there, so you’re never completely satisfied. We have a lot to work on but there’s a lot of great foundation there,” he said. “We've got some length, we’ve got some speed. We’ve got a couple more guys coming in, so we should be okay there,”

Dorian O’Daniel was a standout at the SAM linebacker spot the last two seasons, and his replacement has yet to be named.

“We’re making progress with the outside linebacker,” he said. “I don’t have a definitive answer about who that guy is going to be, but we have made progress there and I say they had a good spring there. Jalen (Williams) did, K’Von (Wallace) did, Mike Jones is coming on. We’ve got some other guys if we need to that can play there as well.”

Venables said he understands expectations will be high heading into the season, but he said he is only worried about today.

“Our team is going to be expected to do this and this and this, and of course we have high expectations ourselves you know we don’t put the win total and the ACC Championship, we just worry about today,” Venables stated.“ Having a sense of urgency, having some stability, respecting the game, respecting how you improve and respecting how you become a dominant player if we do those things everything else will take care of itself. We have the right mindset and maturity to do that, but they got to be the ones that go out and do that. We work hard at keeping the proper perspective with our guys.”