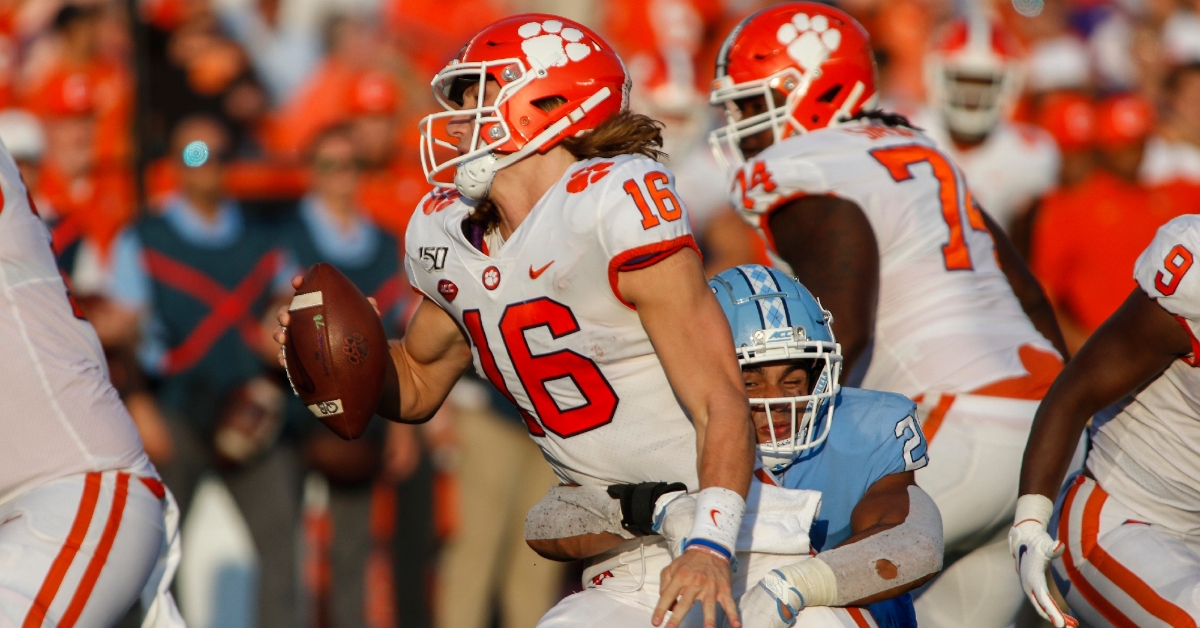 Lawrence is smacked by a UNC defender Saturday (Photo by Neil Redmond, USAT)

CHAPEL HILL, NC – Will the Clemson offense get better or will it stay the same?

The Tigers managed just 331 total yards in Saturday’s 21-20 victory over UNC, and Lawrence was steady in completing 18 of 30 passes for 206 yards and a score. He also rushed the ball 11 times for 45 yards and a touchdown.

It was never easy for the offense which was once again plagued by a slow start in both halves. Will it get better?

“Of course, you'd rather win every game by 30 but I think this game will make us better. You saw last year against Syracuse, similar type game, the fifth game of the season and from there we just got better,” Lawrence said. “It's up to this team now, are we going to get better or are we going to stay who we are right now? Last year, that team got better every week and it really came together, so we'll see if we're going to do that.”

“You've got to give them a lot of credit. Teams aren't going to come out here and lay down for us. It doesn't matter that we're Clemson. They played great,” Lawrence said. “Coach Swinney said that they should've been 4-0 before tonight and they've played some great games, especially the second half. They're a really good second-half team and we knew they weren't going to lay down for us. They played a tough game. They're coached really well. They made some big plays and we also hurt ourselves too.

“They made big plays and you can't take that away from them. In the end, it's just about finding a way. The thing I'll take out of this is never don't enjoy the win. It's easy to forget how hard it is to win and that's what Coach Swinney tells us. It's hard to win, especially in college football playing good teams every week. Just enjoy it. Win by one point or win by 50, it's still a win.”

“Obviously, I missed a few throws tonight that I would've liked to have made but this game is about how you respond and how you keep playing after that play. That's something I really pride myself on,” he said.

As for the offense, Lawrence hopes his group continues to get better.

“There's been a game every year for the past four years or so where it's been close or we've lost, so we know it's hard to win,” Lawrence said. “Sometimes it's easy to forget that when you win so many games by so many points. This game is only going to make us better. Obviously, we'd like to win every game by four touchdowns but it's going to bring us closer, make us better and show us how to appreciate every win, like tonight and just finding a way.”