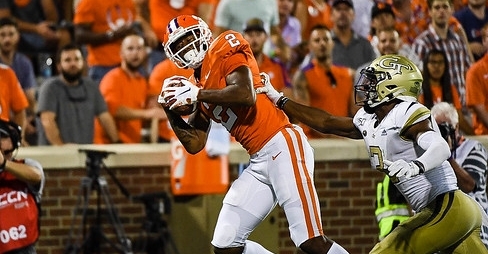 Frank Ladson gathers in his touchdown against Georgia Tech

Junior wide receiver Tee Higgins made a bold prediction prior to Clemson’s Thursday season opener against Georgia Tech, and it had nothing to do with the final score.

Higgins predicted that freshman wide receiver Frank Ladson would fall running down Clemson’s iconic hill during the Most Exciting 25 Seconds in College Football.

That prediction was on Ladson’s mind as he exited the bus and took in the raucous atmosphere surrounding the hill, and he made up his mind. No running full speed. Just take it easy.

I asked Ladson about the prediction as he faced the media following the 52-14 shellacking of the Yellow Jackets.

"He did. I don't know why he did that," Ladson said. "He made me paranoid running down the hill today. So, I didn't really want to run down too fast. I took it easy."

No one was sure if Ladson would be able to play in the opener. He had his left knee scoped late in camp.

“I knew there was a chance I wouldn't (be able to play), but I was determined to come back. I was ready to play,” he said.

Ladson not only played, but he also caught a touchdown pass during the fourth quarter, gathering in a 21-yard pass from Chase Brice for not only the first touchdown of his career, it was his first reception as a Tiger.

“It felt great, especially after missing most of fall camp with my knee and everything," Ladson said. "It felt good just to get out there with my team. Those guys just kept encouraging me all fall when I was out.”

Ladson followed the instructions of wide receivers coach Jeff Scott and made the most of his opportunity.

“The offensive line did a great job and Chase threw a great ball," Ladson said. "We had been running the ball down the field and Coach Swinney, Coach Scott and Coach Elliott decided to take a shot. I knew that it was my opportunity and Coach Scott had been preaching all week that, when your opportunity comes, you have to make the most of it, and that is what I did. It felt great to be out there with my team.”

Ladson wasn’t the only freshman to make an impact, and he felt like members of the 2019 recruiting class more than held their own in their first game action.

"We all were just on the sidelines screaming in the first minutes," Ladson said. "We were just so excited, especially when Jay-Lay (Jaelyn Lay) got out there. I was screaming when Joe got the first kick return. Just excited, really excited. Lannden (Zanders), Sheridan Jones, Jalyn Phillips — all those guys out there running on kickoff. It was real exciting because we have been talking about this since when we first started getting recruited. That group chat was talking about moments like this...we were just blessed to be out there."

Clemson hosts Texas A&M this week in what should be one of the stiffest tests for the Tigers this season. The last time the two teams played – last September in College Station – the Tigers held on for a 28-26 victory. Ladson watched the game from home in Florida but will have a front-row seat for next Saturday’s action.

"I'm real excited," Ladson said. "I'm ready to prepare for it. I know our coaches will have us ready for it."